I tested for you: LEGO Ideas 21310 Old Fishing Store 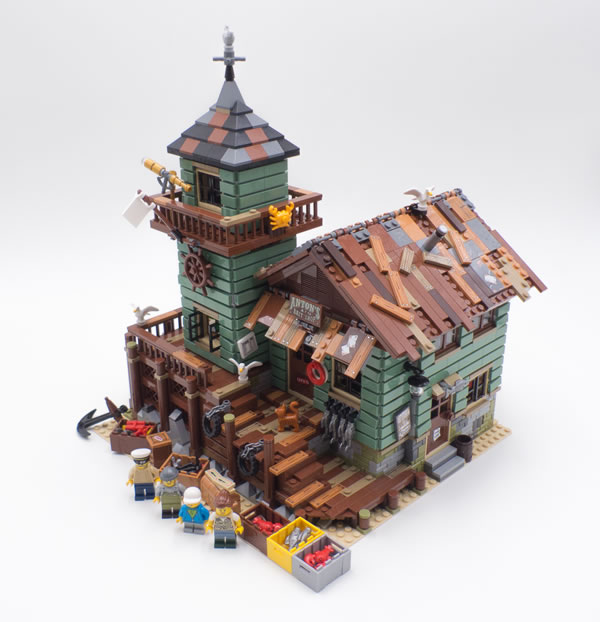 Today we are talking about a set that smells of fog and the coastal villages of Maine dear to Stephen King with its facades with cladding eaten away by sea salt and its roof repeatedly repaired by a gruff old retired captain who must have some amazing stories to tell those few passing customers. This fishing tackle store or 21310 Old Fishing Store gets you in the mood as soon as you open the box. 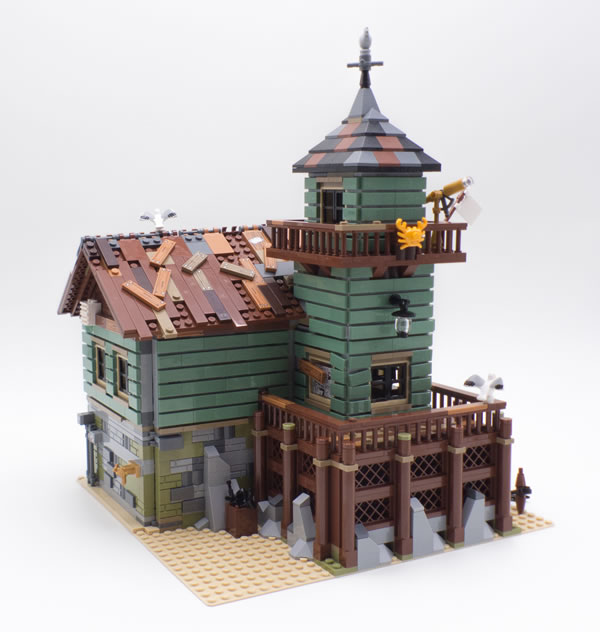 This is one of the strengths of this set. It is a completely new product for adult fans, both in its look and in what it gives off. Your imagination will do the rest. Mine worked a lot during the assembly phase and it's refreshing.

The creator of the project had opted for a finish without visible tenons, even for the base of the set. LEGO preferred to leave a few studs visible on the 32x32 base plate which serves as the perimeter of the set. Probably so that the whole is identifiable as a LEGO product despite the model aspect imposed by the massive use of Tiles on facades and floors. Maybe it was a little too smooth.

On the construction side, everything has been thought out so that weariness does not outweigh the pleasure. The instruction booklet alternates between repetitive phases of masonry and laying of the cladding on the facades and the installation of the various interior elements and accessories. It's well dosed, we don't have time to be bored. The cladding planks that you can shift (or not) as you wish obviously contribute to the somewhat ramshackle aesthetic of this seaside boutique. 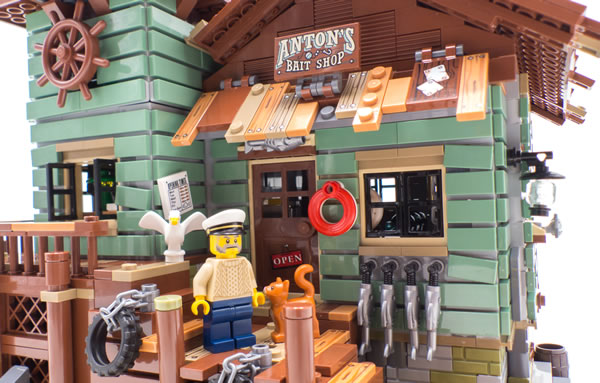 LEGO delivers here a product with obvious exhibition potential, even if the interior of this fishing tackle store, which is ultimately not visible through the small windows, is full of furniture and accessories.

As usual with LEGO, especially with Modulars, we fill the available space until the overdose so that the fan finds his account. The store is full of cool details that leave little room to move around. It's not a big deal, it's not a playset. It is a model whose general atmosphere is precisely created by each of these elements that will fuel the imagination of the LEGO fan.

LEGO has even integrated interior design elements that will not be really accessible afterwards, such as the half of the ladder that gives access to the observation tower. We know it's there since we built it, but that's all, we don't even see it. 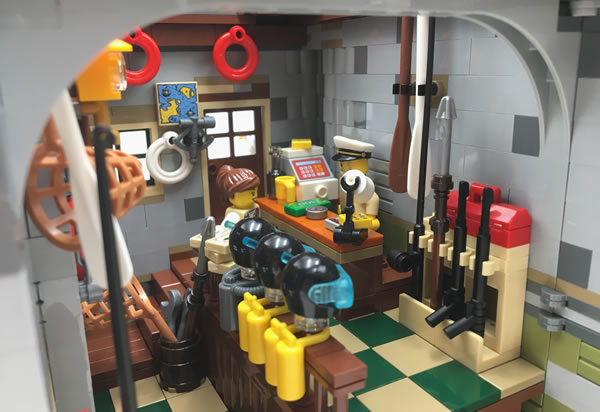 Access to the interior of the building via the facade via two separate mobile elements has been retained by the designer LEGO even if on the original model access to the shop was impossible from this side. The lower section of the wall was only used to reveal what is happening under the store floor. On the LEGO version, the store floor becomes accessible.

To discover the store from above and place the various characters provided, just remove the roof, which borders on the overdose of details. This roof is just placed on the frame but it remains stable and does not slip. 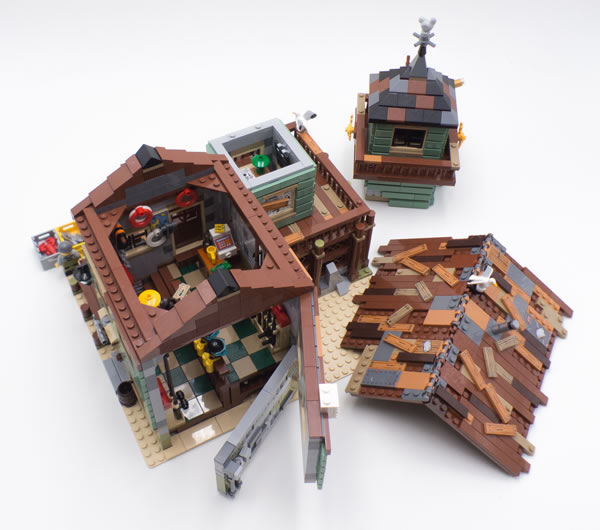 Those who want to stage this building in their city based on Modulars will have to show imagination: not easy to integrate this type of architecture in a city context without creating from scratch everything that should go around. This is the whole point of this set, it opens the way to all kinds of matching creations which will have the same exterior finish. 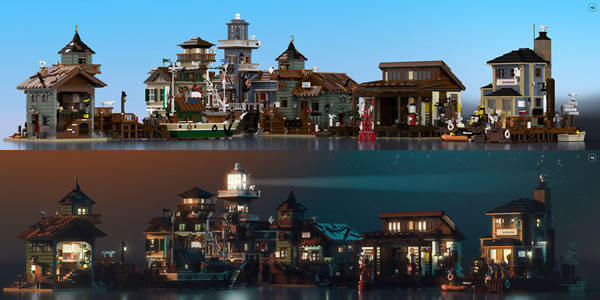 Robert Bontenbal has already delved into the subject with a series of projects that make it possible to obtain a complete coastal village. Now it's up to everyone to be inspired by it to create their own village with this special atmosphere. This set is a starting point, the beginning of a concept that you will have to explore if you want to do anything more than exhibit it alone. 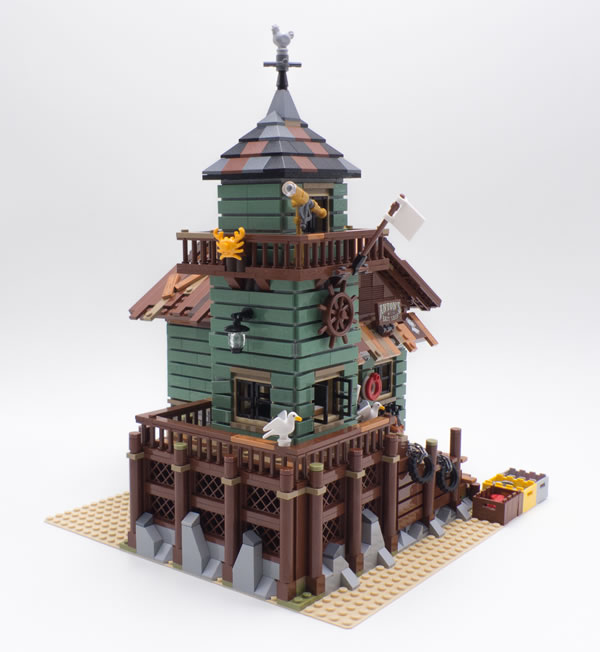 The inventory of this box is also an excellent starting point for other creations of the same type. Pad printed boards, bricks and Tiles in various colors will serve your creativity.

Lots of pad-printed pieces in this box: Boards, sign, pressure gauges, bill, coin, newspaper, post-its, hooks, tables, etc ... And even if this is a LEGO Ideas set, there are still some stickers as in the set 21302 The Big Bang Theory released in 2015, for those who would think this new set is the first in this range to come with stickers.

There are 11 in total, the set of which is great if you prefer to store them away from light and dust. The visual aspect will not really suffer and you can possibly use them to dress another building out of your imagination. Stickers are the absolute evil of LEGO products, but I try to be positive. 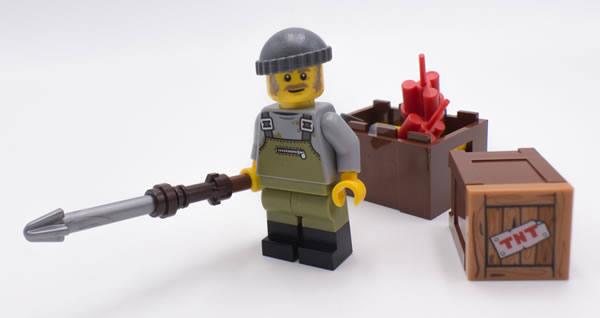 On the side of the minifigs, some will see in the fisherman with the cap a thinly veiled tribute to Robert Shaw aka Quint the shark hunter of the Sea teeth. It's up to you.

For the rest, the boss's sweater is gorgeous, and the customer's multi-pocket cardigan will pull a smile from anyone who has similar gear somewhere in their closet that allows them to take whatever they need (well). more) during their trips to the local lake.

I have no real criticism to make with this set without showing bad faith. If I had to make a point all the same, I think that a very simple boat with two oars would have made it possible to polish the thing up by contributing to the general atmosphere. 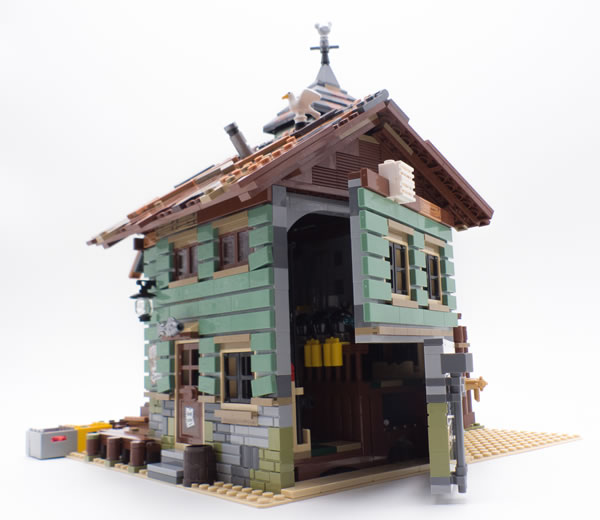 Oh yes, I forgot, once again we find the slight differences in color at the Tiles en Sand green : We will console ourselves by saying that it is in the theme, but LEGO should really work on a technical solution to ensure the uniformity of the color.

As you can see, I think LEGO is offering a set here that puts the brand's values ​​back at the heart of the project. The construction is a real pleasure, the end result is incredibly original and the atmosphere that emerges from this set will really be at the service of everyone's imagination (I already said?, Ah ...). When a LEGO product achieves its goal and goes beyond just stacking scraps of plastic, it's a winner.

The LEGO Ideas range has never lived up to its name as well as with this box. LEGO delivers an idea, perfectly executed. It's up to you to invent the sequel, provided you spend the 159.99 € requested by LEGO from next September 1 to purchase this box.

Note: We do as usual, you have until August 24, 2017 to manifest yourself in the comments.

Update : The winner was drawn and notified by email, his nickname is indicated below.
Without a response from him to my request for contact details within 5 days, a new winner will be drawn. 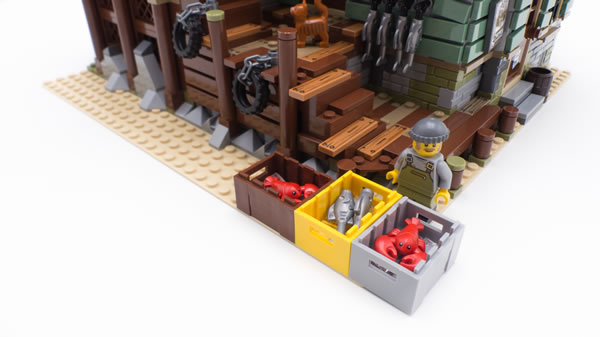 Join the discussion!
Identify yourself via:
Log in
1.7K Comments
the most recent
the oldest Top rated
See all comments

ON THE LEGO SHOP
ELSEWHERE
LAST COMMENTS
PROGRAMMATIC
1.7K
0
Do not hesitate to intervene in the comments!x
14
14
SHARED