LEGO The Hobbit Video Game: You can repack ...

It's official, there will be no additional content (DLC) for the LEGO The Hobbit video game to replay the events of the third installment of the Peter Jackson cinematic saga.

May all those who still believe in it learn the lesson: Better to hold than to run and in the future it will be necessary to be very careful with the innuendos of Warner Bros. and TT Games about possible content proposed later for future games under LEGO license.

The absence of this DLC intended to complete a game that will have left many players who hoped to be able to replay the final battle of the trilogy on their hunger is bad news even if the game offers as it is long hours of adventure and action.

Below is the statement from Warner Bros:

LEGO The Hobbit Video Game: But where is the promised DLC?

Remember: The version of the LEGO The Hobbit video game that had been marketed only allowed to replay the events of the first two episodes of the cinematographic saga: An Unexpected Journey et The Desolation of Smaug.

Warner Bros and TT Games had implied, without ever confirming formally, that a DLC (Additional Content) proposed later would allow players to replay the story of the third installment of the saga: The Battle of Five Armies.

This additional pack was initially to accompany the theatrical release of the third and final part of the saga if we are to believe the various reports of the London Toy Fair 2014 which confirmed the information.

Almost a year after the game's release, there is still no sign of the extra content that many players were hoping to get one day. For its part, TT Games, which is happy to gargle on social networks about the next games announced (LEGO Marvel Avengers, LEGO Jurassic World) is now turning a deaf ear to questions from fans.

Has this additional content ever been really planned? Nothing is less sure. There is no trace, neither trailer, nor visual, of this supposed extension. Several DLCs with additional characters and various and varied accessories have however been marketed around the game.

But TT Games never wanted to officially communicate on the existence of an extension that would allow fans not to feel cheated for having paid full price for a game that ultimately only contains two-thirds of the saga that 'it claims to make it playable.

Bain and Bard in the exclusive Blu-ray / DVD pack 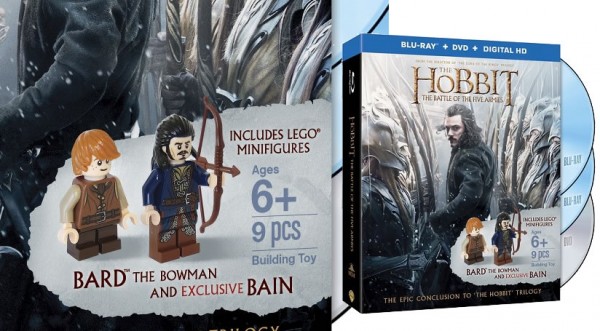 Bain's exclusive minifig will therefore be well distributed in an exclusive Blu-ray / DVD pack of the third opus of The Hobbit saga available on March 24. It is once again the American sign Target which offers this pack for $ 26.99.

To accompany Bain, this pack also contains a minifig of his father: Bard the Bowman.

This second minifigure is not exclusive: It is the version distributed during San Diego Comic Con 2014 and present in the set 79017 The Battle of Five Armies. 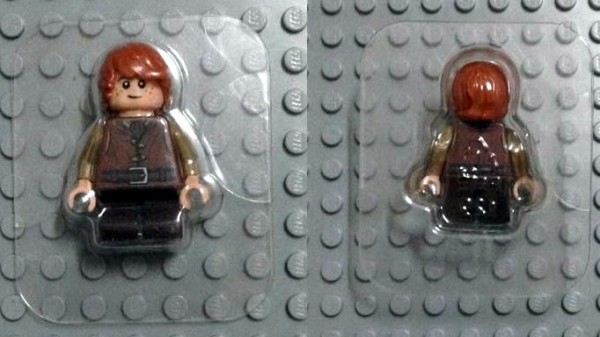 One last minifigure for the road? This will be the case in 2015 with the minifig of Bain, the son of Bard the Bowman in a new variant, moreover already on sale on the Chinese Taobao site.

This character has already appeared in another outfit in the set 79016 Attack on Lake-town.

The above version will most likely come with a blu-ray as was the case for the Bilbo minifigure supplied in 2013 with the first episode of The Hobbit trilogy in a pack exclusive to the US Target brand.

The second part of the trilogy was for its part delivered by the same brand with the 30215 Legolas Greenleaf polybag.

Official LEGO Catalog 2015: Nothing on The Hobbit range 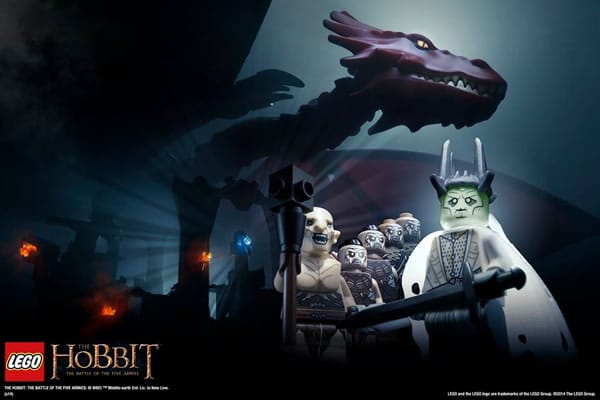 You have all been able to discover the official LEGO catalog which details the products that will be marketed during the first half of 2015, and The Hobbit range is conspicuous by its absence. No trace of the four sets released this fall in these pages while we find in other ranges of boxes that have been marketed for nearly a year (Marvel, DC Comics, etc ...).

The absence of new features in The Hobbit range is not a surprise, we all already understood that LEGO would end this year with the theatrical release of the third and final episode of the Peter Jackson cinematic saga to this series of products. derivatives. But the absence in the catalog pages of The Hobbit products still marketed by LEGO is strange, as if finally the manufacturer wanted to turn the page (!) Of this "temporary" range which therefore comes out the back door after 9 boxes.

Range Teenage Mutant Ninja Turtles is also absent from this catalog, it is difficult to know if it is definitively discontinued or if a few boxes based on the animated series currently airing and which has been renewed for a fourth season in 2015 will be released in the second half of the year.