It's no secret that LEGO regularly changes the instructions and inventory of some of its products to correct errors, improve certain functions or polish the appearance of affected models and it is currently the turn of the Batmobile in the set. Lego batman 76139 1989 Batmobile marketed since 2019 to benefit from a welcome update.

LEGO never communicates on these minor changes in the inventory of the sets concerned and the problem must be important enough for the manufacturer to resign itself to offering a "Service Pack"which makes it possible to correct the observed defect. This was for example the case for the set LEGO Ideas 21303 WALL-E in 2015. 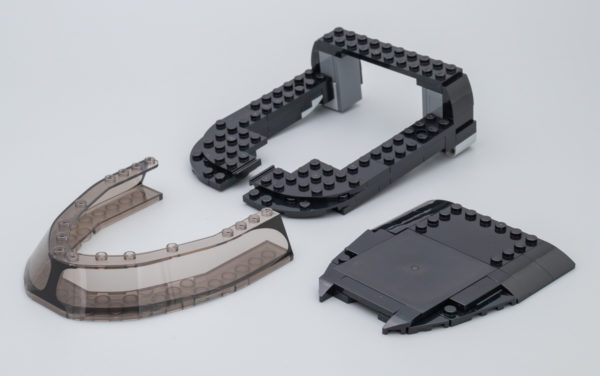 Those who had read my review of the set in November 2019 certainly remember my remark concerning the 6x6 matte plate decked out with a central injection point which served for the roof of the vehicle's cockpit. I must not have been the only one who was disappointed with using this part as LEGO has since replaced this item with 3 tiles 2x6 shiny which allow to stick to the general aesthetics of this Batmobile.

The instruction booklet available online in PDF format has been modified and the illustrative visual showing the Batmobile on a black background has also been updated. The other photos in the booklet and on which we see the designer of the set observing his creation have not been retouched or modified.

Product sheet on the official online store has not been updated, it still presents the set as it was designed when it was launched.

If you want to take advantage of this change at a lower cost, please do not hesitate to contact customer service and politely explain that you want to benefit from this improvement without having to purchase all 3 tiles by retail. You will succeed.

We now know the distribution of a box of 60 sachets of collectible minifigs series 20 (ref. 71027) and there will be three complete sets of 16 characters per box, the most common minifigs being the Power Ranger, the knight and the diver, all three delivered in five copies.

It will therefore be possible to share a box of three and possibly resell the 12 additional minifigs to amortize the cost of acquiring each complete series of 16 characters. 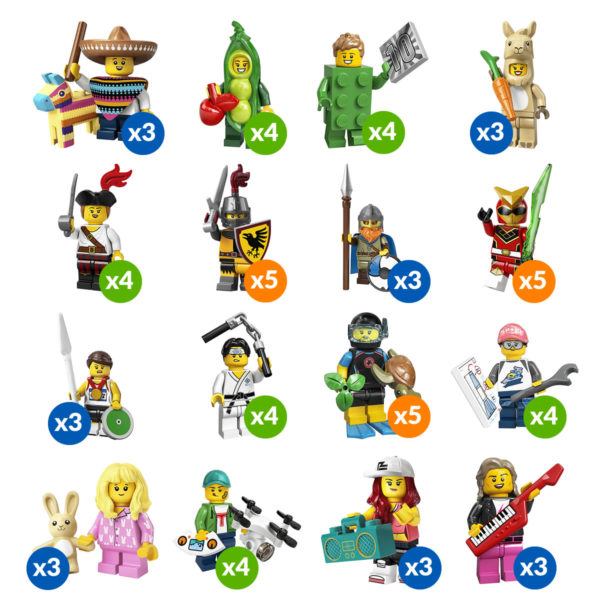 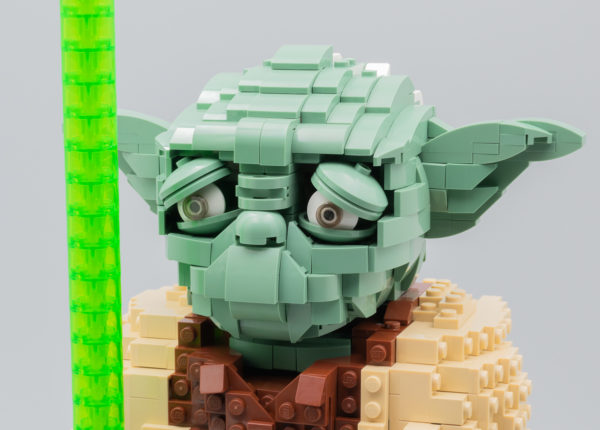 I had saved the best for last before moving on to the 2020 novelties of the LEGO Star Wars range: today we are very quickly going around the LEGO Star Wars set. 75255 Yoda (1771 pieces - 109.99 €), a box which in theory takes over from the version Ultimate Collector Series of the character seen in set 7194, which has really aged poorly since its launch in 2002.

Let's get rid of the subject right away: this new set is not a UCS, nothing allows us to say so without hanging on to the branches and inventing arguments that go in this direction. If all the products that come with a descriptive plate were UCS, it would be known and the sets 75187 BB-8 et 75230 Porg which were also accompanied by a presentation plate do not really deserve to benefit from this classification.

That being said, I wanted to give myself time to really judge this new version of Yoda and not to react negatively to the product announcement. So I had the time to take a good look at this figurine from all angles and I am now sure that I have formed an objective opinion: it is ugly. You too have had plenty of time to form an opinion on this product, or even to buy it, and my opinion is logically only binding on me.

For those who still hesitate, know that the figurine is assembled by slices of stacked pieces which come to be fixed on a frame based on Technic elements. The solution is interesting and allows the thing to be stored at the bottom of a drawer without having to disassemble everything: just remove the various sub-assemblies and lay them flat. On the other hand, it is a little off-putting and you can, like me, assemble the different elements over several weeks, so as not to get bored. If you mess up a bit, nothing serious, it won't really show. 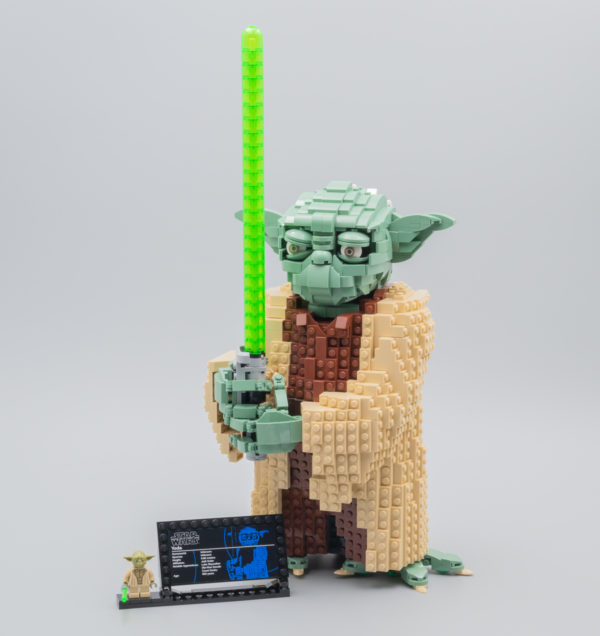 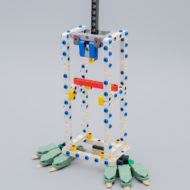 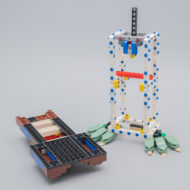 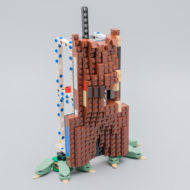 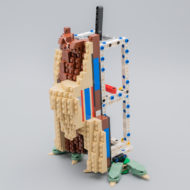 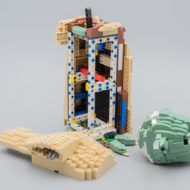 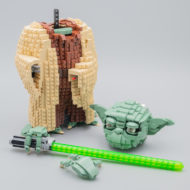 If you like exposed studs, the textural effect of Yoda's coat overlaying his dark tunic is pretty good, the staircase stacking works pretty well from a distance. The sleeves fall, the texture covers the legs of the creature which are in the process well centered under the figurine and the volumes are respected especially at the shoulders.

The bravery piece of the set is obviously the assembly of the character's head which then comes to slip a Technic axis. It's convoluted to perfection with original techniques and we end up with a slightly strange head in the style "Planet of the Apes"which nevertheless seems to me to be well proportioned with the rest of the body. No moving elements on Yoda's face, apart from the eyelids which are too thick which can shift into position"You bought me, now display me on your dresser or I get mad"Or"Oh no, not right away in the drawer where you'll forget me for years to come".

The shape of the face is correct, the nose and the chin are faithful but these bulging eyes with a lot of void around spoil the appearance of the "sculpture" a little. The head can be oriented to the left or to the right, convenient for Yoda to stare at your guests insistently depending on the corner of the dresser on which the figurine will be enthroned.

The lightsaber blade is made up of a string of pieces on a white axis and once in place, the sword is attached to the character's right hand. The weapon is quite successful, with a nice handle. We are satisfied with what we find. Oh yes, the character's hands are also very realistic, with joints that wrap rather well around the handle of the sword. You cannot blame me for being too negative. 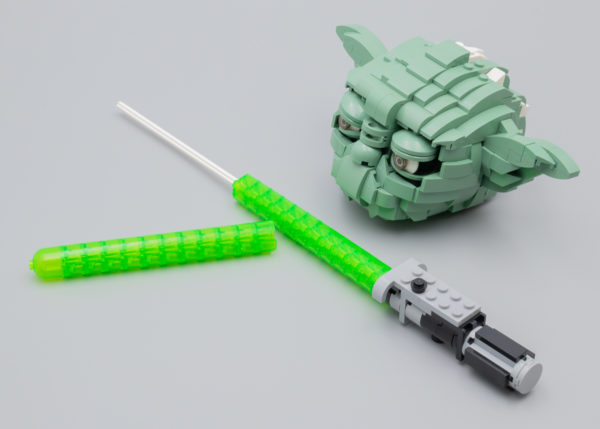 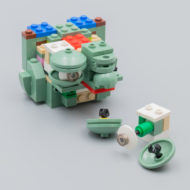 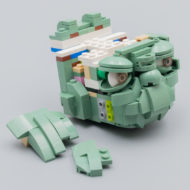 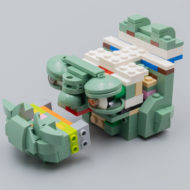 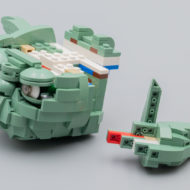 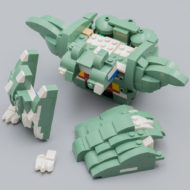 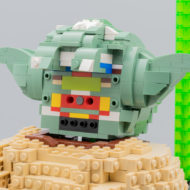 The ultimate snub to all those who spent their money in this box, LEGO provides them with a minifig of Yoda with an olive green head, the color that I think would have been perfect for the head and hands of the large minifigure. instead of Sand green used here.

As a bonus, this minifigure is not even exclusive to this box, it is the one already seen in the sets 75142 Homing Spider Droid in 2016, 75168 Yoda's Jedi Starfighter and in 2017 75233 Droid Gunship this year. The identification plate is not of much interest, it's just a pretext to give the set presence and motivate collectors "of plate sets that are necessarily UCS, it's the thing that said it".

As usual, if you don't have a Yoda "sculpture", don't waste your time trying to get the one from set 7194 which is too expensive on the aftermarket anyway and stick with this one anyway. this which will inevitably end up in destocking everywhere. While waiting for better. 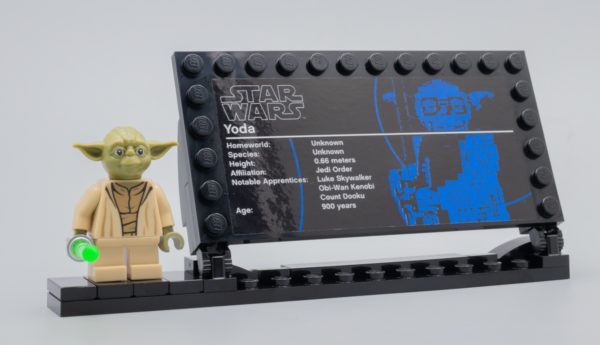 Note: The set presented here, supplied by LEGO, is as usual in play. Deadline fixed at December 23, 2019 next at 23pm. Quickly.

LEGO Creator 40337 Mini Gingerbread House: Close-up of the next set offered by LEGO 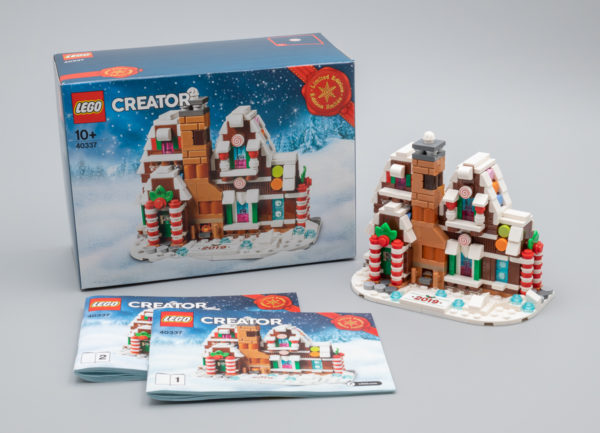 Today we take a closer look at the contents of the LEGO Creator set 40337 Mini Gingerbread House, a small limited edition box of 499 pieces that will be offered by LEGO from December 6 to 24, 2019 from 100 € / 115 CHF of purchase without restriction of range.

You guessed it, this little box allows you to assemble a compact version of the gingerbread house from the LEGO Creator Expert set 10267 Gingerbread House (94.99 €) marketed since mid-September.

With 499 pieces in the box, you can imagine that the inventory here consists of a majority of small elements that will have to be carefully assembled. The set also requires two instruction booklets for a total of 148 assembly steps. In the end, the reproduction offered here is consistent with the large model, all or almost all the attributes of the "big" house are present.

The set offers many original techniques that should appeal to all those who like to discover all the possibilities offered by the LEGO ecosystem. In this regard, this box offers a rather high-end assembly "experience", far from the simplistic polybags or basic constructions sometimes offered in certain products offered on condition of purchase.

There is only one sticker in the box, the one allowing to date the construction with the year of production of this box. You are free to stick it or not on the white part provided. 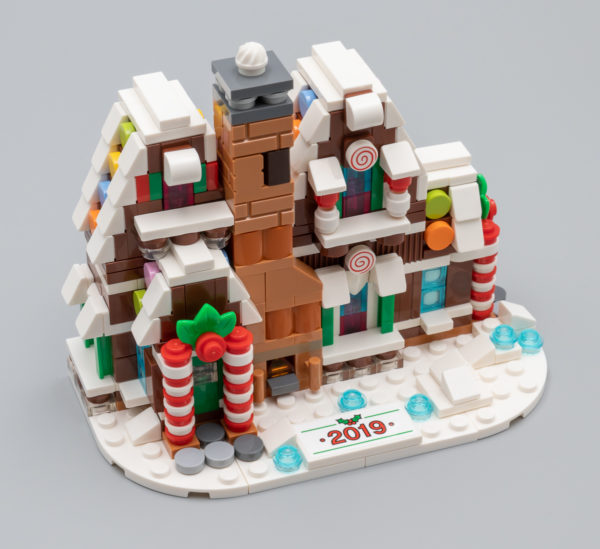 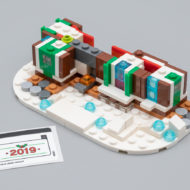 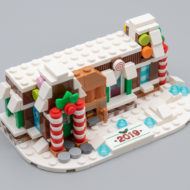 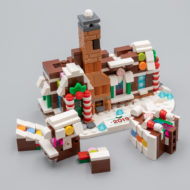 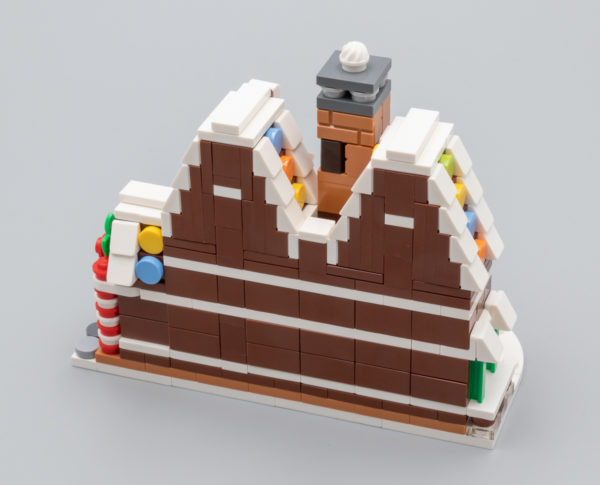 The back of the model is uniform and full. Due to the very small scale of the construction, there are logically no accessible interior spaces as on the version of the Creator Expert set 10267 Gingerbread House. This mini gingerbread house is anyway intended to end up on the corner of a shelf during the holidays or to serve as an element adding an effect of forced perspective in a snowy diorama.

In the end, I am pleasantly surprised by this small box which is not intended for sale but which still offers a real successful construction. The real downside is elsewhere: the minimum purchase to be reached to be offered this set is set by LEGO at 100 € / 115 CHF of purchase and it is a substantial amount. Evil tongues will answer me that at LEGO "for 100 bucks, you have nothing", but I can not help thinking of all those who hoped to have to spend, as in the past, only 65 or 85 € to take advantage of the offer.

An important detail: LEGO has already in the past put on sale products that were previously offered as part of a promotional offer. This small set is valued at 19.99 € on the page that describes the offer, there may be a chance that it will be possible to purchase it separately in the weeks or months to come, when your LEGO budget has found some color.

Note: The set presented here, supplied by LEGO, is as usual in play. Deadline fixed at December 16, 2019 next at 23pm. 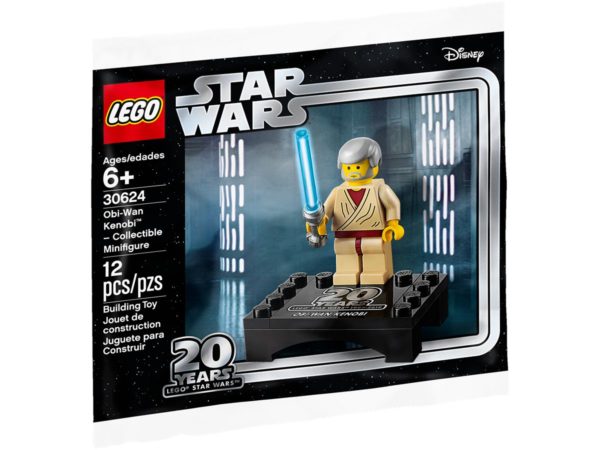 The two offers are now online on the official online store and we therefore know how much to spend and on what dates to be offered the set 40337 Mini Gingerbread House and the LEGO Star Wars polybag 30624 Obi-Wan Kenobi :

Once again, the minimum purchase necessary to get the mini gingerbread house seems to me really too high to allow anyone who would like to get this pretty box to take advantage of the offer even if the set is valued at 19.99 € by LEGO.

The actual duration of these two promotional offers, which will also be available in the LEGO Stores, will obviously be much less than that announced by LEGO ...

For those interested, the sets that benefit from a doubling of VIP points throughout the month of December 2019 are the LEGO Friends references 41375 Heartlake City Amusement Pier (139.99 €) and CITY 60216 Downtown Fire Brigade (99.99 €). 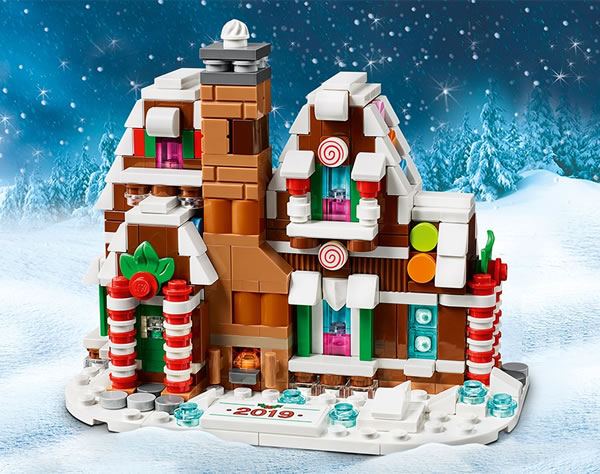