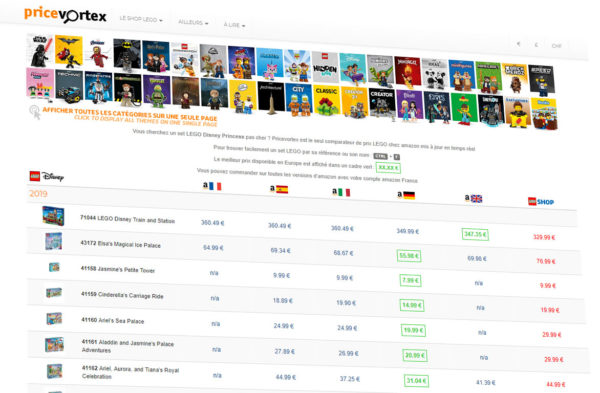 Pricevortex.com is a price comparator created to overcome the weaknesses of other existing tools that abound on the internet: The updates are always too far apart in time and the interest of having a price comparison tool on the various European sites of Amazon is therefore greatly reduced.

Many comparators also require too many navigation steps to finally reach the desired product.

Amazon is a very responsive merchant who does not hesitate to change its prices several times a day to align with its direct competitors. Pricevortex.com allows you to follow the evolution of these prices almost in real time to benefit from the best possible price at the time of purchase.

Visuals of new LEGO products are also added as soon as they are announced or become available.

Navigation is intentionally simplified to the extreme to get to the point: Finding the best price for a LEGO set only takes a few seconds, unlike what you can do on other comparators that are too messy and poorly organized. .

What was originally a tool developed for my own use has since grown into a busy space that allows many fans to take advantage of the best deals on LEGO products without spending long minutes looking for a specific reference.

Are you looking for cheap Lego? sets at discount prices? Pricevortex.com is made for you.

Join the discussion!
Identify yourself via:
Log in
9 Comments
the most recent
the oldest Top rated
See all comments

ON THE LEGO SHOP
ELSEWHERE
LAST COMMENTS
PROGRAMMATIC
9
0
Do not hesitate to intervene in the comments!x