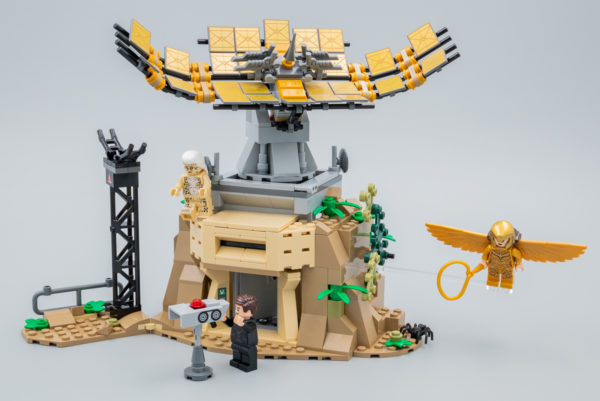 Today we take a quick look at the LEGO DC Comics set 76157 Wonder Woman vs. Cheetah (371 pieces - 39.99 €), a box with content is inspired by the film Wonder Woman 84 whose theatrical release has been rescheduled for next August.

Once is not customary, no vehicle in this box and the set offers us to assemble a small bunker at the top of which is a transmitter. The construction is rather successful with even an original technique to reproduce the loophole placed above the entrance door and a mechanism that allows the set of transmitter panels to be rotated.

The bunker is only closed on one side, undoubtedly to provide a little playability inside the premises, but it remains presentable on the corner of a shelf to stage the three protagonists delivered in this box.

The inventory allows us to obtain a nice lot of pieces in light beige color (Tan) and dark beige (Dark Tan) as well as 26 pad printed panels that we should review in future sets. The fact that these panels are pad printed is also a good surprise, many of us bet on the need to have to stick 26 stickers on these parts with all the problems of centering and alignment that this exercise usually involves.

For those who would ask the question: the transparent rod placed on the side of the bunker and which allows to stage Wonder Woman is not nested in the construction and it can be removed. 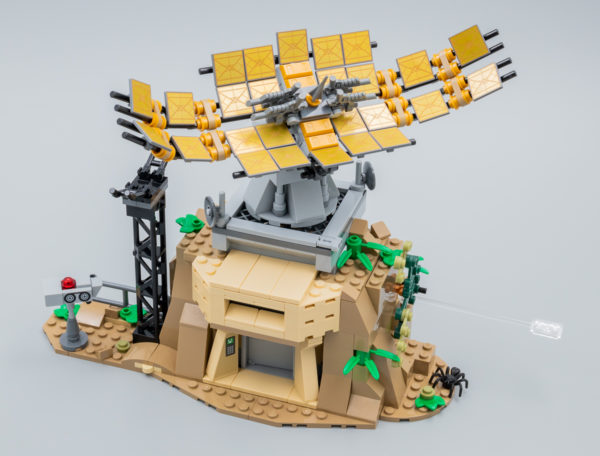 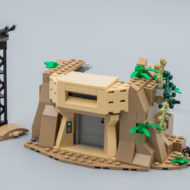 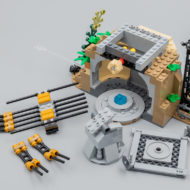 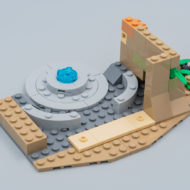 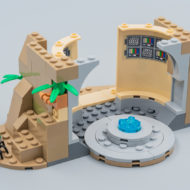 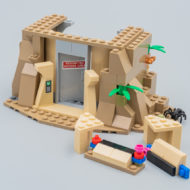 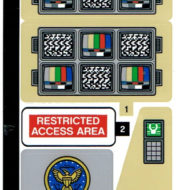 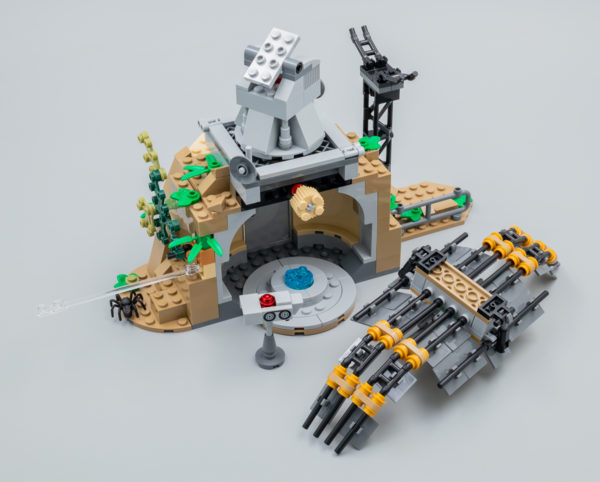 Maxwell Lord's minifigure just reuses Bruce Wayne's torso (76122 Batcave Clayface Invasion) and Gunnar Eversol (75930 Indoraptor Rampage at Lockwood Estate), the face of Peter Parker, Scott Lang or Lucian Bole and the hair is that of a slew of generic characters from the CITY range. It's all a bit shy for a minifigure that in my opinion deserved at least a specific torso with the striped jacket seen in the various teasers of the film.

Barbara Minerva's minifig  aka Cheetah is interesting, with a cute design that runs from head to toe, a back that hasn't been sloppy, and a very successful double-faced head. The white hair can eventually be used by those who want to DIY a Geralt de Riv minifig. 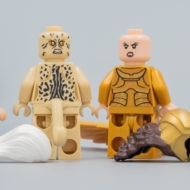 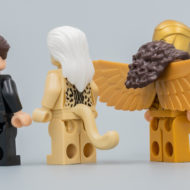 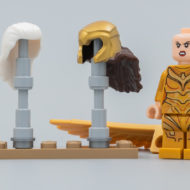 Wonder Woman is provided here with her armor Golden Eagle, an outfit seen for the first time in 1996 in the comic Elseworlds: Kingdom Come when Wonder and Superman face off against a team of young metahumans who are anxious to bring justice but without necessarily considering the collateral damage.

The LEGO version is acceptable if you don't compare it too much to the outfit that will be on screen and accept as usual not to be too staring at the character's neck extension caused by the use Falcon or Vulture wings, here delivered in Pearl Gold. Only the helmet is in Metallic Gold, which contrasts a little with the (too) mat aspect of the rest of the outfit and the hair of the character is integrated at the back with a floating effect which allows to pass over the wings. The result is visually very correct.

But I think it was the occasion to offer us a slightly more ambitious minifigure with real reflections and possibly a pair of retractable wings. LEGO preferred to play it easy and simply "adapt" the outfit seen on the screen.

The fact remains that the pad printing of the torso and legs is nicely executed and that in any case it is the only version of this armor that we will be able to add to our collections. A few lines on the arms would have been welcome for maximum visual consistency, but we will do without.

In short, we get here a nice product derived from a film that will have to be seen to verify that the bunker with its transmitter is more or less compliant, with a very correct assortment of three minifigs which is still missing Steve Trevor (Chris Pine), knowing that this is undoubtedly the only derivative product that LEGO markets (ra) around the film.

This box is sold for 39.99 €, a price that seems reasonable to me considering the effort made to offer us something else to build than a vehicle of little interest and the presence of a large handful of pad-printed parts.

Join the discussion!
Identify yourself via:
Log in
292 Comments
the most recent
the oldest Top rated
See all comments

ON THE LEGO SHOP
ELSEWHERE
LAST COMMENTS
PROGRAMMATIC
292
0
Do not hesitate to intervene in the comments!x
Share to...
bufferCopyEmailFacebookFlipboardHacker NewsLineLinkedInMessengerMixPinterestPocketPrintRedditSMSTelegramTumblrTwitterVKWhatsAppXingYummly