On newsstands: The June 2022 issue of the official LEGO Batman magazine 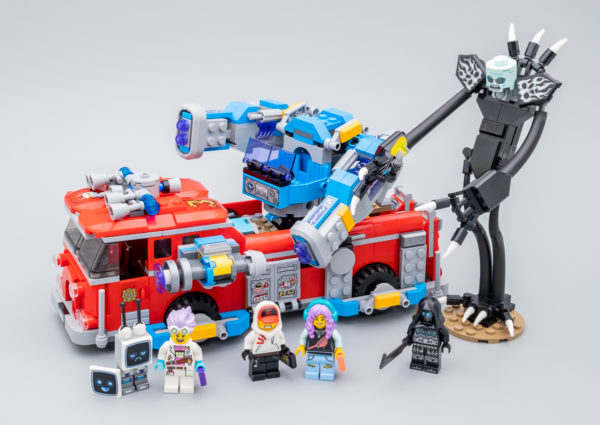 Today we are quickly interested in the LEGO set 70436 Phantom Fire Truck 3000 (760 pieces - 69.99 €), a box that allows us to obtain a nice partially transformable fire truck and some characters from the Hidden Side universe.

As for the set 70434 Supernatural Race Car, it is especially the vehicle that interests me here and the possibility in this specific case of transforming part of it into a robot is a significant bonus. As is often the case in the LEGO Hidden Side range, each set is a more or less subtle mix of diverse and varied influences and this one is no exception. The result is generally rather original even if the identity of the range sometimes loses a little legibility in passing. Here we can't help but think of the universe Transformers even if we quickly understand that the mech resulting from the transformation of the truck does not make use of the entire vehicle.

We first assemble the part of the truck that will not be used by the robot with the driving position, a space at the back of the cabin with some screens and a keyboard, the multicolored wheel to scan to take advantage of the contents of the set in the game in augmented reality and the back of the chassis on which we will insert the robot.

The interior spaces are easily accessible by removing the roof of the truck and the machine can eventually be stripped of its attributes specific to the Hidden Side universe to make a more classic version. The upper part of the robot can in turn be removed and replaced with a large ladder or a fire hose, it's up to you to see what you want to do with this truck.

An interesting detail: the designer of the set, Niek van Slagmaat who is also the designer of the LEGO Ideas set 21311 Voltron Defender of the Universe, has uploaded some preliminary sketches of the truck and its different conversion possibilities. These are only working drafts, but we discover the different avenues envisaged to integrate this truck into the somewhat crazy universe of the Hidden Side range (see below). 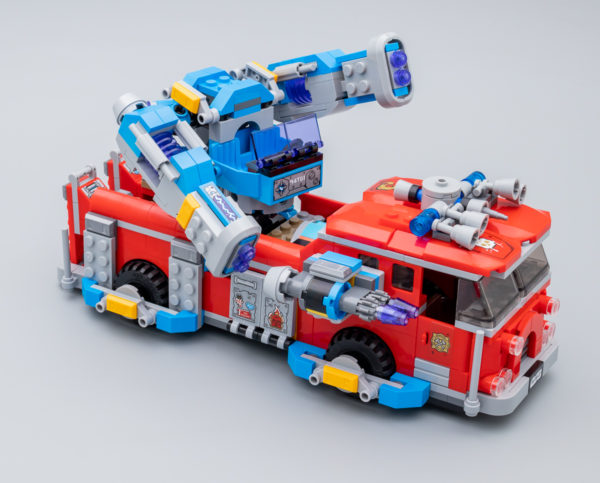 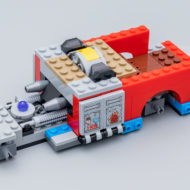 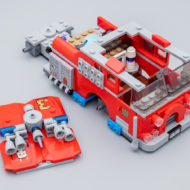 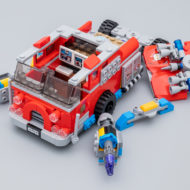 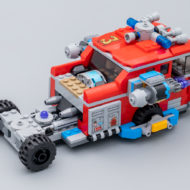 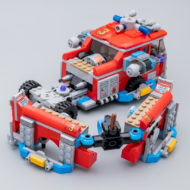 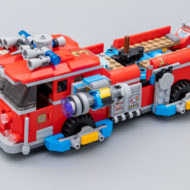 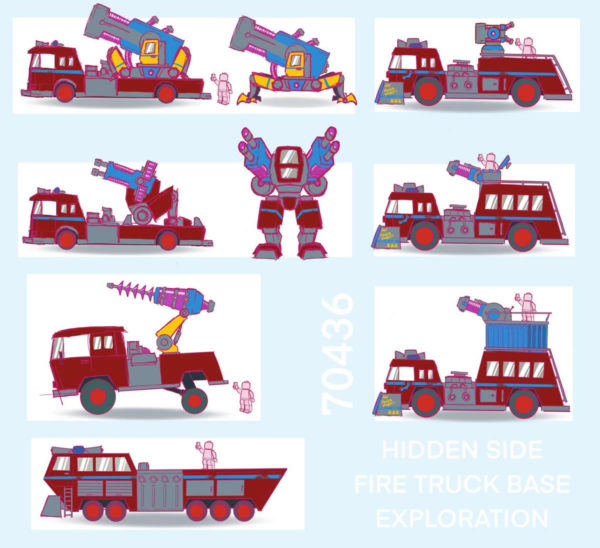 This same designer did not hesitate to stuff the set with more or less obvious references to other LEGO universes or ranges: LEGO Racers, Bionicle with Tahu's mask or even a reference to the Res- theme. Q of the LEGO CITY range (1998/99) on the stickers and even a more or less obvious connection with the world of the Japanese film Promise released in 2019. This animated film for a rather confidential audience stages the adventures of firefighters at the controls of mechs including a MATOI-TECH to which the text of the sticker placed at the front of the cabin refers directly (M4T01). We also find the number 3 on the legs of the robot delivered in this set, as on the red baggy pants of Galo Thymos, the hero of the animated film.

As I said above, the accumulation of references and nods to different licenses or universes is not a bad thing, but sometimes we have the impression that the Hidden Side range draws a lot elsewhere and forces a little too much on fan-service, losing a little of its own identity in the long run.

The mech that can be deployed from the rear of the vehicle is rather well integrated if we admit that the LEGO Hidden Side range offers vehicles with original capacities that go far beyond what one would find in more classic universes. The truck body unfolds to form the legs and feet of the robot, and the large cannon then becomes the cockpit.

The mech is not foolproof stability, it will be necessary to find its point of balance so that it stands up, especially when minifigs are installed at the controls. The big advantage of the relatively simplistic modular system used here: the robot can be deployed in seconds and reintegrated into the body of the truck just as quickly. This is a real plus for the playability of the product, we avoid tedious handling and we play without losing patience.

The mech also allows and above all to stage a balanced confrontation with the villain of the set, Nehmaar Reem (the Harbinger), who needs an opponent at his height, even if there is no coin thrower. in this box and that it is therefore impossible to knock out this villain with some ammunition launched for example from the arms of the robot. I have the impression that the designers have deliberately ignored this functionality to favor virtual action in the associated video game rather than making this set a playable product without having to use the parents' smartphone. It is kind of a shame.

The truck is covered with stickers which really help give the vehicle its final appearance. If you intend to make it a "classic" one day, some of these stickers will be more or less superfluous. 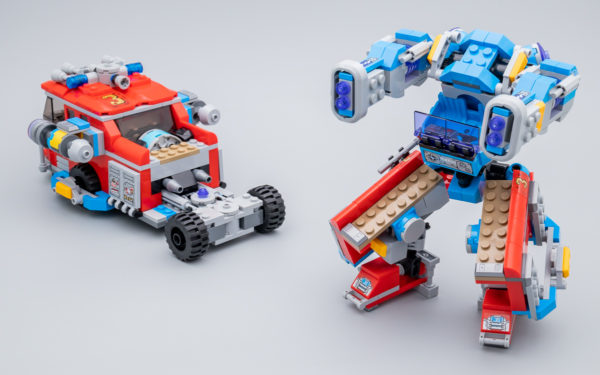 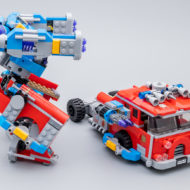 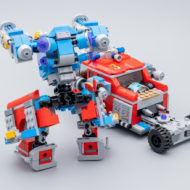 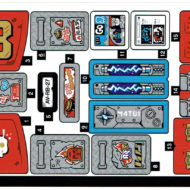 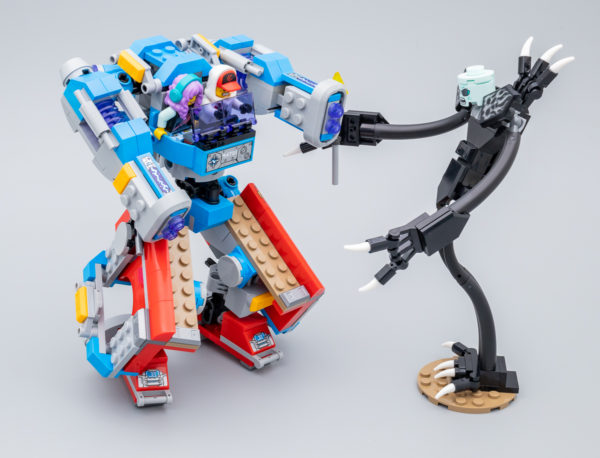 As for the characters delivered in this box, the Jack Davids minifigure is identical to the one seen in the set 70430 Newbury Subway, that of Parker L. Jackson is a combination of elements seen in many boxes of the range and that of JB is also in the set 70432 Haunted Fairground.

JB is here accompanied by her assistant TeeVee, a little robot about which we don't know much except that it looks strangely like the robot delivered in 2011 in the 6775 Alpha Team Bomb Squad set. His presence in this new box seems above all to be yet another fan-service operation wanted by a designer anxious to integrate his favorite character in at least one of the boxes in the range. The little robot will doubtless remain exclusive to this box and it comes with two interchangeable screens depending on the mood you want it to display.

The ax is used to sets from the LEGO CITY range which feature fire soldiers and we get here three different smartphones that will expand your collection or feed your SFR store MOC. In the LEGO Hidden Side range, we hunt the ghost with our smartphone and LEGO insistently reminds us once again.

The torso, head and legs of the unique Shadowwalker delivered in this box are also included in the sets 70434 Supernatural Race Car et 70437 Mystery Castle. The minifigure is generic enough to be used again in a diorama of your own.

Nehmaar Reem (the Harbinger) is delivered here in a different version from that of the set 70437 Mystery Castle, he displays an allure that will eventually refer to Jack Skellington or the Slenderman with a very slender body and menacing upper limbs that are connected to the torso via Ball Seals. As usual, you will understand that everything that is not on the sticker sheet, of which I give you a scan at each of my reviews, is therefore pad printed. 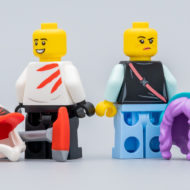 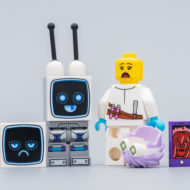 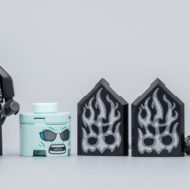 In short, I think this set deserves your attention. It offers a nice vehicle with a transforming ability that may seem anecdotal to some of you but that will appeal to anyone who played with Optimus Prime or other Transformers in their youth. The assortment in minifigs is not very original especially for those who already have Jack, Parker and JB in multiple copies but we already find this box less than 60 € elsewhere than at LEGO and it will undoubtedly one day be destocked around 50.

Knowing that the death knell has sounded for the LEGO Hidden Side range and that we will therefore not see any new sets coming to expand the twenty boxes already on the market, I think it is time to add to our collections the few sets from the range that offer interesting models. As far as I'm concerned, this box is one of them.

Join the discussion!
Identify yourself via:
Log in
479 Comments
the most recent
the oldest Top rated
See all comments

ON THE LEGO SHOP
ELSEWHERE
LAST COMMENTS
PROGRAMMATIC
479
0
Do not hesitate to intervene in the comments!x
12
12
SHARES