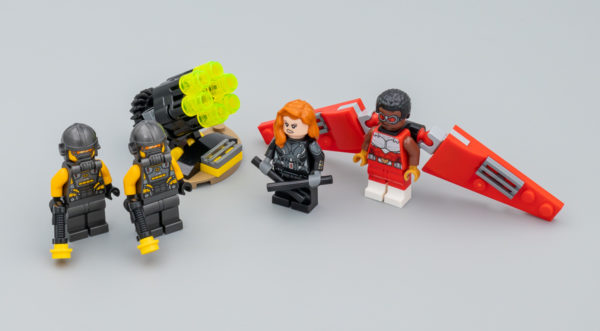 Today we return to the Marvel Avengers universe with the small pack of LEGO characters 40418 Falcon & Black Widow Team-Up (60 pieces - € 14.99) marketed since June and that I had forgotten in a corner.

This small box which serves as a complement to other sets more or less inspired by the Marvel's Avengers video game published by Square Enix only allows you to obtain one truly new character, the other three figurines being also available in other boxes marketed this year. year.

Black Widow's cute minifigure with prints on the arms is identical to the one delivered in the sets 76153 Helicarrier et 76166 Avengers Tower Battle. Here it is equipped with classic sticks which in my opinion are more suitable than the lightsaber handles with the Harry Potter wands that come with the 2020 version of the Helicarrier.

The two AIM agents are the ones seen in the sets 76143 Avengers Truck Takedown, 76166 Avengers Tower Battle et 76167 Iron Man Armory. No jetpacks or additional equipment for these two villains, here we have to be content with "naked" versions of the usual minifigs with their respirators in Titanium Metallic.

The Falcon minifig delivered in this small character pack is an updated version of the one in the set 76018 Avengers: Hulk Lab Smash (2014), here equipped with legs in two colors. We will appreciate the effort but these legs only accentuate the difference in color between the white of the boots which is tinted throughout and the pad printing, moreover very detailed, of the upper torso.

LEGO also took the trouble to pad two different expressions on the face, but this change in mimicry comes down to the orientation of the line which symbolizes the character's closed mouth. It's thin, a real smile or a really "angry" expression would have allowed for more marked variations. The effect of transparency on the glasses worn by the character is very successful.

The jetpack with the brick-based wings won't necessarily appeal to all fans. Some will prefer the molded wings delivered in 2016 in the set 76050 Crossbones' Hazard Heist or those of the set 76018 Avengers: Hulk Lab Smash (2014). Those provided here at least have the merit of being able to be oriented for poses a little more dynamic, even if they seem a little too crude to me to convince.

Finally, and because we must be able to justify the name "construction toy", LEGO delivers here enough to assemble a small rotating cannon that will be used by the two AIM agents. Nothing crazy, but it is still more playability for the youngest. 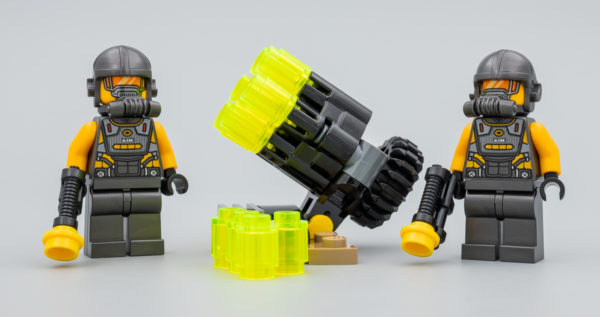 In short, for 15 €, there is nothing to think about for too long: If you absolutely want to add this unprecedented version of Falcon to your collection, for the moment you have no choice and you have to do the acquisition of this small pack of characters. The rest of the inventory is not unheard of, but Black Widow's minifigure is superb and the two AIM agents will eventually be able to flesh out a diorama.

Note: The set presented here, supplied by LEGO, is as usual in play. Deadline fixed at September 16, 2020 next at 23pm.

Join the discussion!
Identify yourself via:
Log in
304 Comments
the most recent
the oldest Top rated
See all comments

ON THE LEGO SHOP
ELSEWHERE
LAST COMMENTS
PROGRAMMATIC
304
0
Do not hesitate to intervene in the comments!x