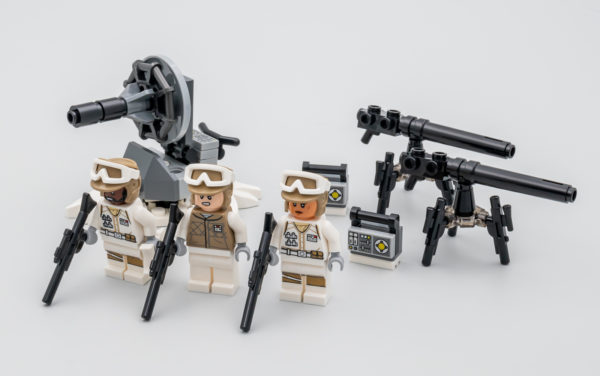 We continue with a quick glance at the contents of the LEGO Star Wars blister pack 40557 Defense of Hoth, a small product of 64 pieces including three minifigs which will be available from January 1, 2022 at the public price of € 14.99. As for the other product of the same type which will be available at the same price, the reference 40558 Clone Trooper Command Station, it is a simple pack of generic figurines accompanied by some parts. The theme here is the Battle of Hoth, a subject treated to the point of overdose by LEGO, which allows many fans to embark on ambitious dioramas filled with AT-ATs, generators, Snowtroopers and soldiers. rebels.

This character pack will come at the right time to add some content around the set's craft. 75313AT-AT, possibly accompanied by the biped of the set 75322 Hoth AT-ST. LEGO is perhaps missing an opportunity here to provide us with a piece of trench which could be extended by acquiring several copies of the set and we must be content with a 1.4 FD P-Tower laser cannon on a reduced scale and of two Mark II EWHB-10 machine guns. Those who lack blasters, because they were replaced in the Battle Packs by Stud Shooters, will have here what to equip their troops by boning for example the tripods of the two machine guns which each use three copies.

The laser cannon placed on its vaguely snowy base and which is here at the center of the action is very basic, you should not expect better with such a small inventory. We feel that LEGO is content with the minimum union to justify the designation "construction toy" of this type of product whose real vocation is to supply the armies of fans with minifigures. 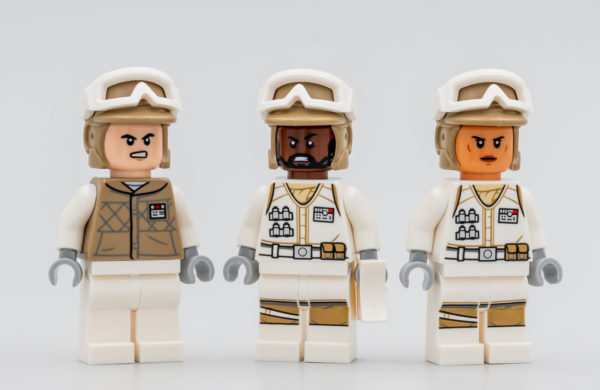 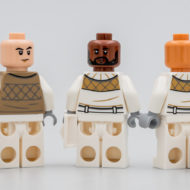 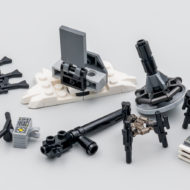 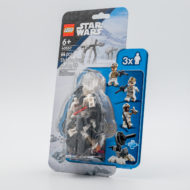 The three minifigs provided are generic enough to allow their accumulation. The brown torso is the one that will also be delivered in the set 75322 Hoth AT-ST for the single rebel soldier provided and the other two minifigs are identical, only the head changes. LEGO is playing the diversity card here with three skin tones and a female character. Some finishing problems on the pad printed legs with an unprinted area at the junction with the thighs and smudges on the faces, it's time for LEGO to make real progress on its pad prints.

LEGO does not change the level of the headgear and glasses of these rebel soldiers. I have always found these big glasses a bit ridiculous when placed on the face of a minifigure and I hoped that one day LEGO would dare to directly pad print the accessory on one of the faces of the heads used but it will not be for this time. However, the accessory works a little better when it is placed on the cap.

These rebel soldiers can for example face the soldiers of the sets 75320 Snowtrooper Battle Pack which will also be available from January 1, 2022. Three rebel soldiers for € 14.99 against four Snowtroopers for € 19.99, it is not very balanced but it is not so serious either, we know who loses in the end. The packaging is attractive, the price is correct if we take into account the prices charged in the LEGO Star Wars range, this small set of gondola head will undoubtedly end up in many caddies to the delight of young fans. Fans of snow-covered dioramas should also find plenty of room for them, with generic troops to be distributed along their trenches.

Note: The set presented here, provided by LEGO, is as usual involved. Deadline fixed at 21th December 2021 next at 23pm.

Update : The winner was drawn and was notified by email, his nickname is indicated below.

Join the discussion!
Identify yourself via:
Log in
392 Comments
the most recent
the oldest Top rated
See all comments

ON THE LEGO SHOP
ELSEWHERE
LAST COMMENTS
PROGRAMMATIC
392
0
Do not hesitate to intervene in the comments!x