Today we are quickly interested in the content of the LEGO Star Wars set 75337 AT-TE Walker, a box of 1082 pieces which will be available at the retail price of €139.99 from August 1, 2022 on the official online store and in LEGO Stores.

Long-time collectors may already have the version of the set on hand. 4482 AT-TE marketed in 2003, that of the set 7675 AT-TE Walker marketed in 2008, or that of the set 75019 AT-TE launched in 2013. Others may have spent their money on the version inspired by the anime series Star Wars Rebels and marketed in 2016 under the reference 75157 Captain Rex's AT-TE. The AT-TE is therefore a real chestnut tree in the LEGO Star Wars range, there is always a LEGO version available in the catalog for fans and this year it is the turn of this new interpretation.

Is it necessary to specify it once again, this is a toy for children and not an ultra-detailed exhibition model. There is therefore no point in criticizing the product for its shortcomings in terms of design, proportions or finish, this is not the purpose of this box and the emphasis here is above all on the playability and the possibility of handling this AT- TE without breaking everything. That being said, the construction may eventually find its place on a shelf in the middle of other sets on the same theme without having to blush.

The AT-TE is very quickly assembled but the process is relatively interesting with an internal structure based on Technic elements on which the six legs and the various sub-assemblies which constitute the cabin of the machine are grafted. We feel that this toy was designed with solidity and playability in mind, nothing comes loose or falls during handling.

The designer has not reinvented the wheel this year and this new interpretation shares many techniques and finishing details with the previous versions even if the most observant will note some welcome aesthetic improvements in the finish of the dropouts which are now truly faithful to the version seen on screen. 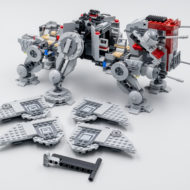 The adjustment of the cabin on the internal structure is correctly executed and the few somewhat empty spaces which could have allowed a glimpse of the interior of the machine are blocked by the addition of four panels which come to "close" these angles a little open in the center of the building. The technique used may seem a little hasty but the result is effective and that is the main thing about a product that is not primarily intended to serve as an exhibition model.

The cockpit is removable, a Clone can be installed there and this sub-assembly is not likely to come off thanks to a Technic axis which prevents the whole thing from coming out of its tracks inadvertently. We find two Stud Shooters new generation under the main barrel, they are perfectly integrated but they can also be removed if their presence bothers you.

The legs have not been designed to allow them to be oriented according to your mood of the day, they fall into their final position when the AT-TE is placed on the ground and the two central legs remain vaguely movable because they are not fixed to the body of the machine by a single pin.

The transport of the AT-TE is facilitated by the presence of a handle which avoids having to grab the machine from below. This no-frills handle is very well integrated, it is very discreet and it does not disfigure the construction. The different internal spaces are easily accessible, just move the side and top panels that only fit on a Technic pin or two clips.

There's not much inside this AT-TE, but there's plenty of room with nine slots in total to fit the five included minifigs, collectors can even complete the squad with some Clones from the set 75036 Utapau Troopers marketed in 2014, even if the figurines will not be coordinated with each other.

The sheet of stickers provided brings its share of details to the cabin but the gray background of these stickers is, as often, not perfectly matched with the color of the parts on which they must be installed. More annoyingly, the two emblems are not centered correctly with a black border that becomes uneven when the two stickers are removed from the board.

The endowment in figurines here is rather correct with enough to have fun from the unpacking without having to go back to the checkout. The Battle droids are still so sad, LEGO doesn't really make an effort about them anymore and the three copies provided are as usual not stamped. Cody is here accompanied by a Clone Gunner and three identical infantrymen, it's probably never enough for die-hard 212th Battalion fans, but I think the assortment is enough to have a group effect and build a small basic army to possibly expand later with other miniatures.

The pad prints are very accomplished with a real attention to detail, the Clone Gunner already seen in 2017 in the set 75182 Republic Fighter Tank enjoy some extra detail on the torso and legs here, the Clone Troopers lose their orange arms and black hips but gain a bit of a bump on the torso and this new version of Cody really detailed and true to the outfit seen in the screen should easily find its audience among the fans.

The designer has even taken the attention to detail to include the character's signature scar on the figure's face. I'm not a fan of the accessory that serves as a visor on Cody's helmet, it's probably time for LEGO to innovate a bit and produce an element that fits better with the helmet or, let's dream a little, that the manufacturer us offers a helmet that directly integrates the accessory.

The three Battle droids provided in this box are accompanied by a Spider droid which barely serves as a credible opposition to the AT-TE. A Crab Droid would perhaps have been more appropriate to offer something more substantial and to be completely faithful to the confrontation seen on the screen. the Spider droid is relatively simple, it is correctly executed but it is not equipped with a Stud Shooter which could have brought some playability.

A slightly annoying technical detail: the pad printing of the orange area on the helmet of the three Clone Troopers is significantly distorted and shifted forward. The point of the pattern disappears while it is clearly visible on the official renderings which are therefore a little too optimistic compared to the result obtained "in real life". This defect will go unnoticed by many young fans but it should annoy some more demanding collectors who will find once again that LEGO does not really keep the promises made on the digital renderings of its products.

In short, this AT-TE is undoubtedly the most complete and detailed ever released by LEGO and there is no reason to pay a high price for one of the previous versions via the secondary market. The promised playability is there and the machine can also end its career on the corner of a shelf while waiting for LEGO to decide one day to offer us a real model of the thing. The public price of the set is high, but it will be enough to wait for other brands to offer this product to be able to obtain it around a hundred euros, which seems to me to be a more suitable price.

Note: The set presented here, provided by LEGO, is as usual involved. Deadline fixed at August 4, 2022 next at 23:59 p.m. Just post a comment under the article to participate.

Update : The winner was drawn and notified by email, his nickname is indicated below.

Join the discussion!
Identify yourself via:
Log in
1.2K Comments
the most recent
the oldest Top rated
See all comments

ON THE LEGO SHOP
ELSEWHERE
LAST COMMENTS
PROGRAMMATIC
1.2K
0
Do not hesitate to intervene in the comments!x
2
2
SHARED
Share to...
bufferCopyEmailFacebookFlipboardHacker NewsLineLinkedInMessengerMixPinterestPocketPrintRedditSMSTelegramTumblrTwitterVKWhatsAppXingYummly