Sales: Where are the LEGOs? 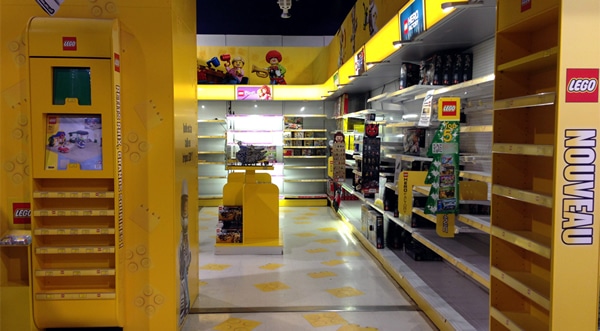 If you are used to taking advantage of the sales to expand your collection or your bulk, you have probably noticed that this year LEGO sets are rather rare in the shelves of large distribution chains dedicated to the large annual destocking as well as among online merchants.

As a preamble, we can recall that all analysts are unanimous: After three years of significant increases, the toy market shows a slight decline of 2% in 2012. However, this decrease must be weighted: 2011 was an exceptional year thanks in particular to the Beyblade license.

2012 also saw the arrival in force of digital tablets for children and connected toys on the shelves of toy stores.

Regarding LEGO, it is difficult for the moment to draw conclusions about the noticeable absence of their products in the shelves devoted to sales. However, we can mention several tracks:

- Merchants may have better anticipated their sales volumes and better managed their supplies. But we can also think that LEGO has not been able to supply enough merchandise to retailers, which probably explains why stocks are at very low levels after the holiday season.

- Availability (and prices) are significantly better at online merchants than in neighborhood stores. Amazon, to name but one, is a big seller of LEGO and the manufacturer cannot do without this distribution channel, undoubtedly to the detriment of smaller merchants who thus suffer the full brunt of the shortage of boxes.

- LEGO products sell well all year round, no need to cut prices to sell boxes. The brand is on the rise, its ranges are popular and the competition is struggling to find its place. In addition, ensuring that LEGO products do not invade the shelves during sales periods, it is also to avoid devaluing the products.

- LEGO, like other brands, also takes back unsold goods after the end of the year holidays. Everything is not systematically settled. It depends on the agreement between the merchant and his supplier. This approach is understandable. You might as well take back unsold sets from a merchant who has not done the job and allocate them to another who is capable of making volume outside the holiday season rather than selling off high-end products.

- There are obviously sales on LEGO products, but you have to be quick. Professionals (or amateur sellers forgetting to declare their activity) scour the supermarkets as soon as the sales open to collect the boxes sold at reduced prices and resell them later on eBay, Priceminister, Bricklink and others.

LEGO remains one of the rare toy brands (don't tell me here about the manufacturers of collectors' products printed in a few dozen copies), some products of which see their price increase on the secondary market without having to wait half a century. This no doubt partly explains the storming of the LEGO department during the sales period.

Small clarification: When you meet Grandpa and Grandma at Carrefour who fill their trolleys with LEGO boxes, tell yourself that it is not necessarily the ideal grandparents who prepare the birthdays of small children. They may also be on a mission ...

(Illustrative photo of empty LEGO shelf received by email, thanks to BFLV)

Below, the direct links to some merchants offering LEGO on sale (or not, or more ...)

First of all, below are the direct links to the most active merchants during this period of sale.

We start the sales with Games Avenue which offers interesting discounts on many LEGO sets with Star Wars, Monster Fighters, Lord of the Rings, etc ...

Please note that all the links to the LEGO department at the main merchants are indicated on Pricevortex at the top of the menu bar for easier and faster access, especially in this time of digital rush.

Click here or on the image below to go to Avenue des Jeux.

Among the interesting offers:

At LEGO, during the sales we increase the prices

Just a quick reminder that sometimes you have to be wary of the LEGO Shop when it comes to pricing.

The products are sold there at the public price, that is to say the theoretically highest price (except at certain scammers of the Amazon marketplace, Bricklink or eBay) at which the product is marketed.

The only way not to pay the full price at LEGO is the VIP card (free) which gives you the right to a 5% reduction in the form of a credit to spend on your future purchases.

I'm sure there are other sets in the LEGO Shop that have just experienced an unexpected and sometimes significant increase in their retail price, so be sure to check that LEGO hasn't concealed a small increase before you jump into it. price comparison at the different merchants.

I note, however, that the set 75014 Battle of Hoth is sold at the (relatively correct) price of 49.99 € and indicated as "Hard to find". It is therefore one of the few sets that will have to be obtained through the LEGO Shop, this type of set is generally sold much more than its retail price on the alternative channels, amazon included.

Range Teenage Mutant Ninja Turtles is also listed on the LEGO Shop FR. The prices are those expected, I will get the turtles on eBay or Bricklink.

Shopping: Sale and LoC polybag offered on the LEGO Shop 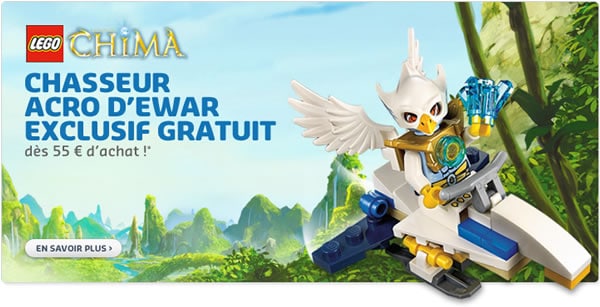 Unless you never watch Gulli or have no internet access, you'll find it hard to escape the Legends of Chima wave: TV commercials, LEGO "commissioned" reviews on many blogs or sites, etc. ...

I'm not a fan of this line, it's no secret, but I'm not bigoted either.

On the sales side, I didn't find anything very interesting but I'll let you watch at this address.