Bricklink Designer Program: the official visuals of the sets from the 3rd phase of crowdfunding

On the VIP rewards center: LEGO sets 40584 Birthday Diorama and 40585 World of Wonders available in exchange for VIP points

On the LEGO Shop: the February 2023 LEGO novelties are available 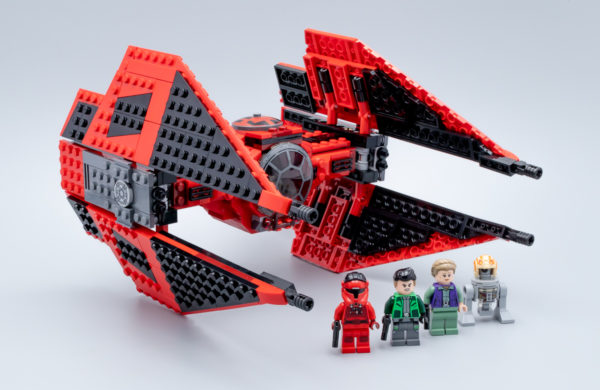 Today is the turn of the second LEGO Star Wars set of this year 2019 based on the animated series Star Wars Resistance, the reference 75240 Major Vonreg's TIE Fighter (496 pieces - 74.99 €), to be the subject of a quick test.

A nice red and black Tie Interceptor, four never-before-seen figures, this box has it all unless you really consider the animated series to be secondary content of little interest. Major Elrik Vonreg is a First Order pilot under Phasma who seems to be very keen on aesthetic details. His TIE Interceptor therefore matches his pilot outfit. Or the opposite. 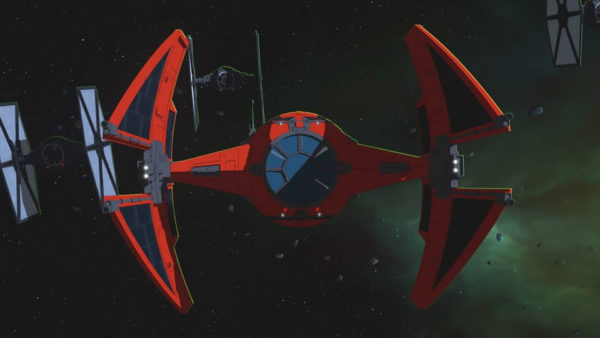 Two Spring-Shooters are nicely concealed under the cockpit. Their integration is successful, as is that of the mechanism used to eject the two missiles, placed just behind the cabin. I also salute the great efforts made by LEGO on many sets to correctly integrate these Spring-Shooters without disfiguring the model concerned.

Despite their apparent fragility, the ship's wings are very strong and nothing comes off in flight. The cockpit is spacious, it can accommodate the Vonreg minifig without having to force to close the canopy and the upper valve, the latter being very useful for correctly positioning the minifig if you have big fingers ... 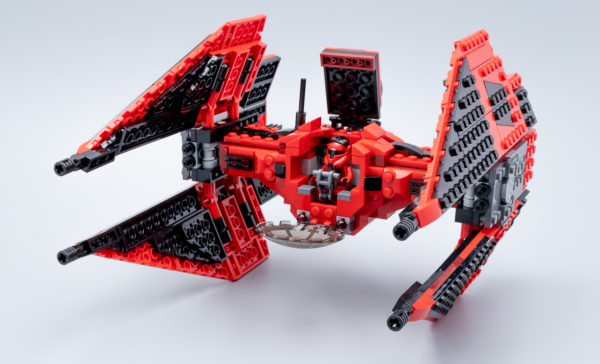 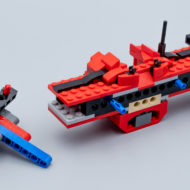 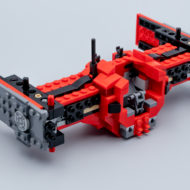 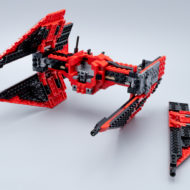 No stickers in this box, the rare patterned elements such as the part that dresses the upper part of the cockpit are pad printed. This Dish black and red is also unique with these patterns and it effectively contributes to the finish of the model.

Beware of scratches on transparent parts, they walk around in their bag with many other parts and it is not uncommon for them to suffer during the various logistical phases. Please do not hesitate to contact customer service to obtain a replacement part if yours is damaged. 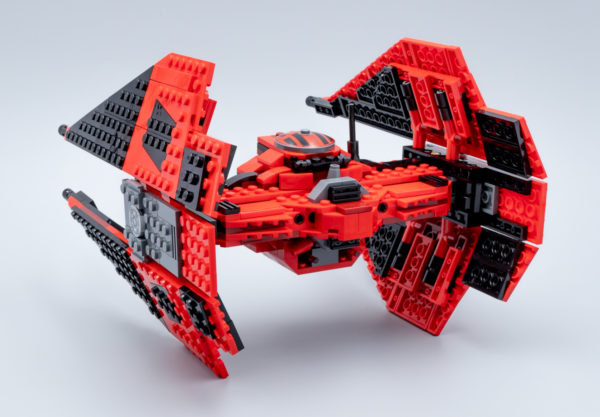 The main character of the set is obviously Major Elrik Vonreg who pilots the supplied ship. The minifigure of the character is really very successful and respects the version of the animated series down to the smallest detail.

Too bad that LEGO did not take this attention to detail a little further to the point of equipping the minifigures with epaulettes in Dark Red flanked by the First Order emblem. The character's torso, legs and helmet are obviously new and for the moment exclusive to this set. As for Phasma in her time, no face on the minifigure which is satisfied with a neutral black head. 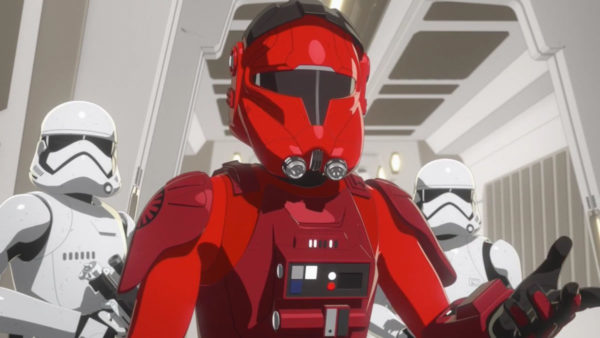 Kazuda Xiono, nicknamed Kaz, is also delivered in this set. The minifig conforms to the animated version of the character and the two-color hairstyle is a very successful accessory that fits well with the minifig version of the young pilot. All the elements of this figurine are new and for the moment exclusive to this set, including the head with double facial expression.

Kaz is here accompanied by Bucket (R1-J5), a small astromech droid for whom LEGO has done their best. It's okay without being exceptional, but it was probably difficult to do otherwise to reproduce the look of this badly battered droid. For those who don't watch the series, just remember that Bucket is sort of the equivalent of Chopper in the Star Wars Rebels animated series. 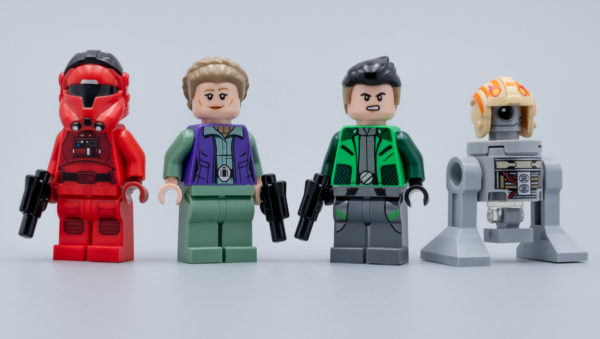 As for the set 75242 Black Ace TIE Interceptor and its exclusive Poe Dameron minifigure, LEGO does not forget here to wave to collectors who do not necessarily follow the animated series but who are very attached to the iconic characters of the Star Wars universe.

Leia Organa is in the box and in a new and for the moment exclusive version. The torso of the minifig is a variant of the version seen in the set 75140 Resistance Troop Transport (2016) and with this new face, Leia looks more like Carrie Fischer here than the version of the character with her youthful face seen in the animated series. I think that's actually good news for anyone who collects minifigs based on the Star Wars Cinematic Universe. 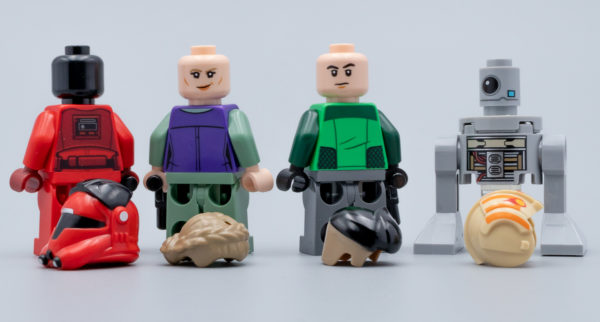 In summary, this set really has everything to appeal to young fans of the animated series and to those not so young who will be happy to find a new version of Leia here. The ship comes in a very original skin, it is solid and has two cannons for guaranteed playability. The set also allows you to obtain the two new wing elements (Wedges) 6x4 in black (6 x left, 6 x right) and in red (4 x left, 4 x right) and the four figures provided are unpublished. 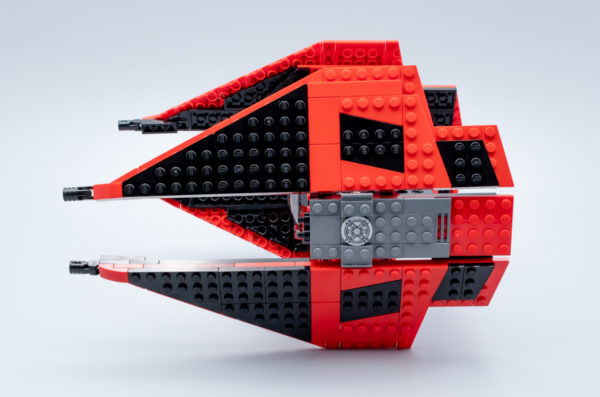 Note: The set shown here, supplied by LEGO, is included as usual. To participate in the draw, all you have to do is post a comment (avoid "I participate, I try, etc ..." be a little more constructive) on this article before the May 26, 2019 at 23:59 p.m.. You have every right to disagree with me, this is not eliminatory.

Join the discussion!
Identify yourself via:
Log in
748 Comments
the most recent
the oldest Top rated
See all comments

ON THE LEGO SHOP
ELSEWHERE
LAST COMMENTS
PROGRAMMATIC
748
0
Do not hesitate to intervene in the comments!x