Cyber ​​Monday: last day to enjoy 20% off the LEGO Shop 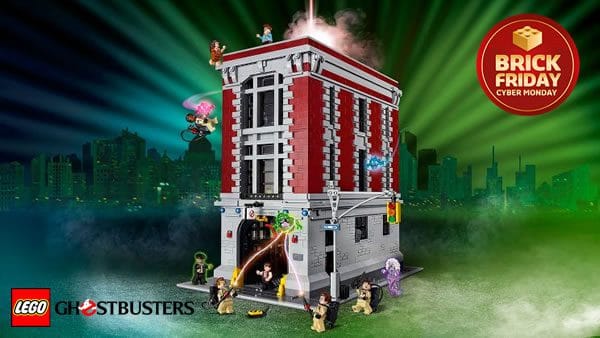 Exit Brick Friday, the LEGO version of Black Friday, and make way for Cyber ​​Monday, the last day to take advantage of a 20% reduction on some LEGO boxes and get the 40254 Nutcracker set free from € 65 purchase.

The "surprise" set of the day is the reference 75827 Ghostbusters Firehouse Headquarters.

Regarding the LEGO Boost 17101 Creative Toolbox set, the good deal of the moment is rather at amazon where this box is displayed at the price of 110.49 €. Even with a 20% discount, LEGO is therefore not competitive on this product.

The sets on sale today:

Note: Don't forget to answer to the question of the day for one more chance of winning a LEGO Star Wars 75187 BB-8 set. 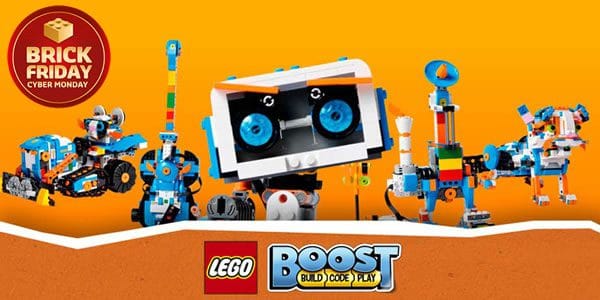 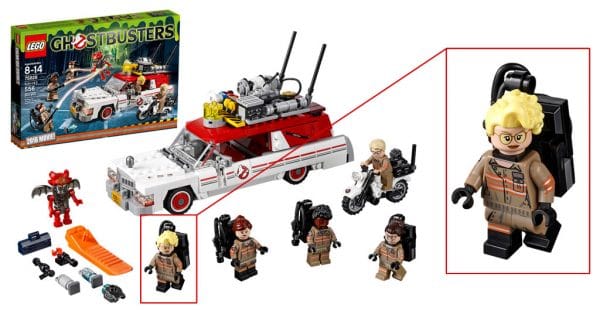 I read and re-read dozens of reviews and other ultra-detailed infomercials from this set all over the internet and no one seems to mention this version of the character ...

Yet it is present on the official visuals, whether on the product sheet on the LEGO Shop (image above) or in the visual gallery uploaded by LEGO on Facebook to announce the release of the set (left image below).

The minifigure on the right, also present on the official visuals, is however well in the box, but the other face of the supplied face does not include the glasses of the visual on the left.

So I'll ask you the question again: Who has the alternate version of Jillian Holtzmann, with his personalized torso (the collar is unique and the badge clearly mentions the character's initials) and his golden glasses? WHO ?

(Special thanks @MRGNDRFFR for asking LEGO the question on Twitter...) 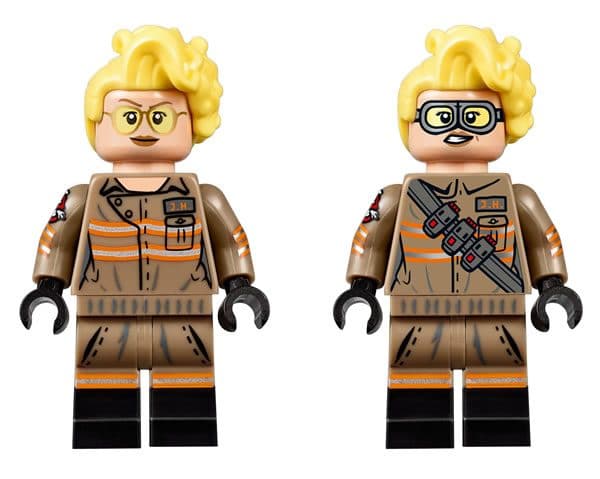 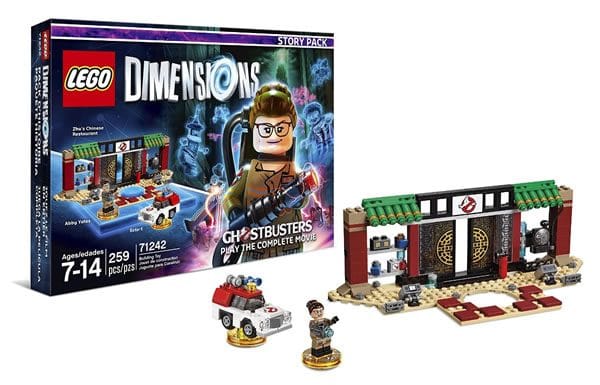 Let's go for the first visuals of the various LEGO Dimensions expansion packs that will be announced today.

In addition to these images, the licenses Fantastic Beasts and Where To Find Them, The Goonies, The LEGO Batman Movie, Teen Titans Go!, Knight Rider, The Powerpuff Girls, Sonic The Hedgehog (Level Pack 71244), ET (Pack 71258), Beetlejuice, Lego city undercover, and The Gremlins are definitely confirmed just like the appearance of a fashion Battle Arena with four players. Below, the launch trailer for this second phase:

These sixth wave expansion packs [Wave 6] were uploaded by amazon Mexico a few hours ahead of the official announcement and an announced availability date of September 27, 2016.

First of all, a new type of pack: The Story Pack. In the box, 259 pieces with enough to assemble a new dress for the Toy Pad (Zhu's Chinese Restaurant), Abby Yates and an Ecto-1 microphone, with the possibility of playing a complete "story", the equivalent of a video game in its own right.

In the case of Story Pack 71242 Ghostbusters, it's the next Ghostbusters movie that will be fully playable with six levels. Two others Story Packs including one based on the film Fantastic Beasts and Where To Find Them with Newt Scamander's minifigure and the other on The LEGO Batman Movie are provided.

Le Team Pack 71256 (visual not available) will be based on The Gremlins license with the characters of Gizmo and Stripe.

Last but not least, le Fun pack 71251 based on the A-Team [L'Agence Tous Risques chez nous] license is now known. It contains the iconic van from the TV series and the Barracuda / Mr T minifig.

On the accessories side, a display in the form of a stackable brick illuminated by a few LEDs and which will allow the display of its expansion packs is already available at amazon : 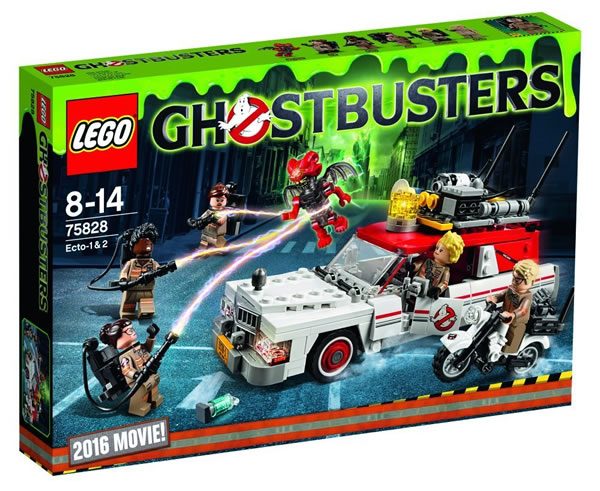 We talk briefly about the Ghostbusters set 75828 Ecto-1 & 2 with the visual of the box. Public price US $ 59.99, availability announced for July 1st. LEGO has also taken care to mention on the box that this derivative product is based on the reboot to the female cast ...

In this set, which should be the only derivative of the movie at LEGO, six minifigs: Kristen Wiig aka Erin Gilbert, Melissa McCarthy aka Abby Yates, Kate McKinnon aka Jillian Holtzmann, Leslie Jones aka Patty Tolan, Chris Hemsworth aka Kevin the receptionist and a monster / demon / ectoplasm, the new version of the Ecto-1 and as a bonus the Ecto-2 which is in fact a motorcycle.

For those who missed it, the gallery of official visuals unveiled last February is available in this article.

Since we are talking about the Ghostbusters license, I inform you that I was able to obtain a second copy of the set 75827 Ghostbusters Firehouse Headquarters that I would put in play in July on the occasion of the film's release. 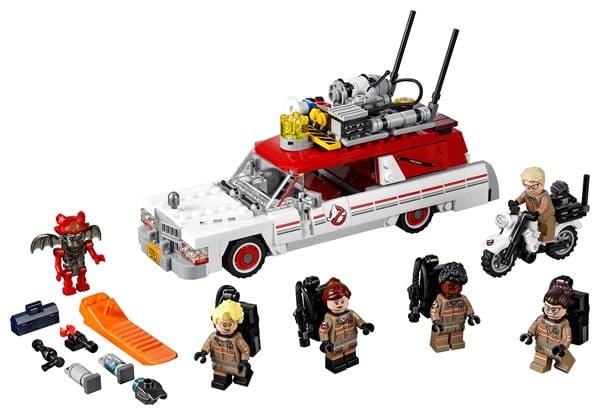 Ghostbusters Contest: The winner of the 75827 Firehouse Headquarters set is ... 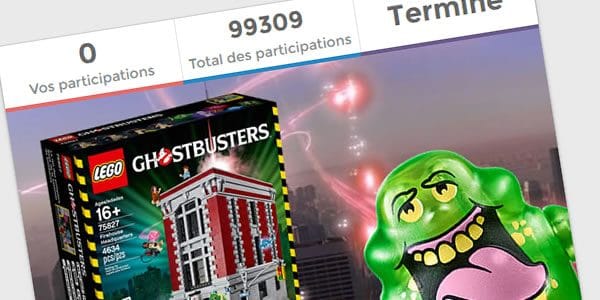 The draw for the competition to win a copy of the set LEGO Ghostbusters 75827 Firehouse Headquarters worth € 389.99 has been made and the winner's name is displayed in the widget below. For information, the latter validated a total of 7 participation tickets.

Some details about this competition which attracted many participants: This operation was relayed by several sites which list the majority of the competitions organized everywhere on the internet.

Even if most of the "contest professionals" who arrived here through these sites have contented themselves with spamming the comments, believing they have validated their participation, a large number of them have also registered through the Gleam interface.

It is normal and legitimate. It is inconceivable to "reserve" this type of competition to a category of people and to exclude arbitrarily and on dubious criteria other potential participants.

In another register, cheating attempts, often awkward, were numerous and the participations concerned were invalidated before the drawing of lots so as not to distort the random nature of the latter.

Finally, the winner is not necessarily the one who validated the greatest number of tickets, it is not a ticket race. Validating tickets simply increases your chances.

I'll say it again, if you can't stand losing, don't play: There's only one winner and whether it's a LEGO fan or not, a regular blog visitor or not, a kid, an adult, a man or a woman, I don't care. He was drawn and therefore wins the bet.

Other contests will be organized regularly on the blog and on social networks. There is something for everyone: The brands or brands that provide the prizes, myself through the visibility generated, and ultimately the winner (s).

Before participating, I therefore invite you to take stock with yourself on your ability to accept losing without then coming to express your disappointment via the usual conspiracy theories.

That being said, thank you to LEGO for the prize, thank you to all participants for playing the game and well done to the winner who was contacted by email to organize the delivery of his very large gift.