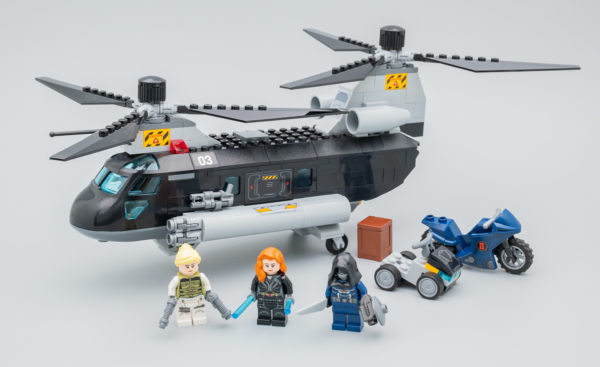 Today we are quickly interested in the content of the LEGO Marvel set 76162 Black Widow's Helicopter Chase, a box of 271 pieces sold at the public price of 29.99 € which is in principle inspired by the film Black Widow whose theatrical release, initially scheduled for April 29, 2020, has been postponed to next October.

So, we do not yet know if this product is really derived from the film or if it is a more or less approximate interpretation of one of the scenes that we will see on the screen.

I think LEGO has once again mixed everything up and that the packaging and contents of this box vaguely refer to one of the scenes seen in the trailer which must have been pitched very briefly to the designers: "... a helicopter, snow, the two heroines, the villain, and whatever you want around to entertain the children ...".

In the box, there is therefore something to assemble a Chinook helicopter, because two rotors are better even if the helicopter in the film is not of this model, which should bring back memories to fans of the LEGO CITY range which have acquired the set 60093 Deep Sea Helicopter marketed in 2015, a motorcycle, a mini-quad and three characters: Black Widow (Natasha Romanoff), Yelena Belova and Taskmaster (Anthony Masters).

If there is therefore in this box something to have fun for the youngest with three vehicles and three figures, the construction phase will undoubtedly leave the most demanding on their hunger. It is assembled very quickly and there is as often a very large handful of stickers to stick to dress the Taskmaster helicopter and Black Widow's motorcycle. 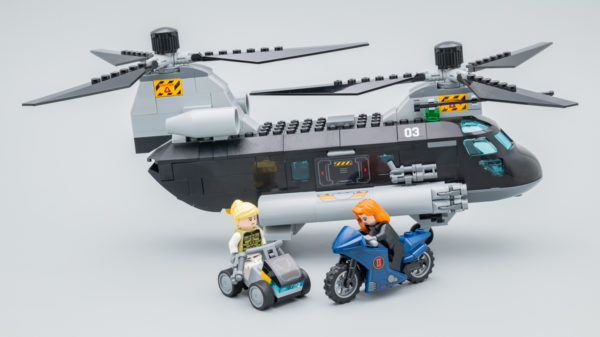 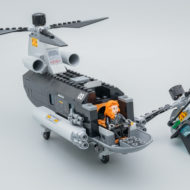 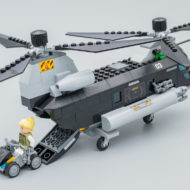 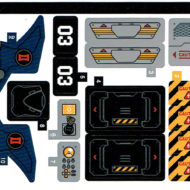 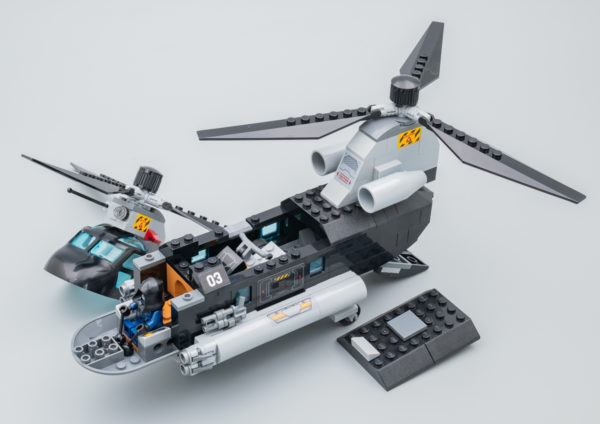 The helicopter with its black cabin and its weaponry based on Stud Shooters is quite successful and it offers enough interior space to store a few minifigs or the mini-quad. The latter can be housed in the helicopter by passing through the hatch located at the rear or by lifting the roof of the machine. The cockpit is accessible by removing the large canopy.

In addition to the helicopter, we also get two other vehicles including the essential Black Widow motorcycle with its two large side stickers and a mini-kart for Taskmaster.

Not sure if the latter is in the movie, but I found this LEGO version rather funny, we can even put Taskmaster and his loot, the brown chest in which we find two ingots and a diamond. Like micro-Mighty Micro, in fact. 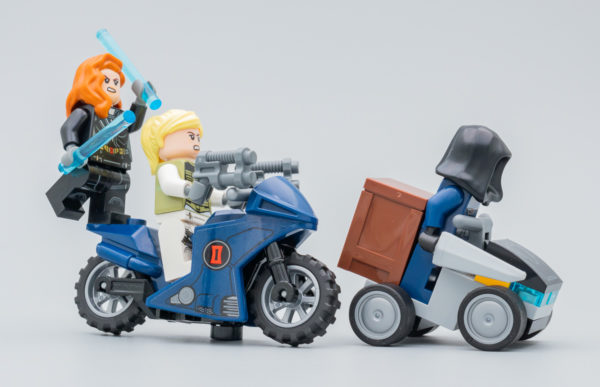 As for the minifigs provided, it's a full box: They are all three unpublished and until proof to the contrary exclusive to this box even if Yelena Belova has the features of Hermione Granger or Pepper Pots and Natasha Romanoff has her usual face which is also that of Rachel Green, Padme Amidala, Jyn Erso or Vicki Vale.

The tampographs of the torso and legs of these two characters are impeccable and the outfits are faithful to those seen in various scenes of the film. Regarding the legs, we still have a bit of the impression that the pattern on the knees is cut too brutally.

The Taskmaster minifigure is also relatively faithful to what we have been able to discover of the character's outfit in the various trailers released so far. Too bad for the neutral legs, but the pad printing of the torso is perfect, from the front as from the back.

The hood here is completely black when it is actually rather colorful in the movie with white stripes and a red piping. The mask and the visor pad printed on the head of the minifigure seem to me to conform to the version seen on the screen.

In the character's hand, a protective Pearl Dark Gray already seen in various sets Marvel, Ghostbusters, Ninjago or Nexo Knights which serves as a handle for the shield or as a support for the blade provided.

In short, this product derived from a film not yet released sold for 29.99 € will undoubtedly not go down in the annals as an absolute reference in terms of creativity, but there is something to have a little fun and three nice minifigs to add our collections of Marvel characters.

We can regret the absence of Red Guardian, and knowing that there is little chance that LEGO will market a second product derived from the film, it is not this time that we will be entitled to a minifig version of this character.

Note: The set presented here, supplied by LEGO, is as usual in play. Deadline fixed at May 12th next at 23pm. The prize will be sent to the winner only when the health situation allows it.

Join the discussion!
Identify yourself via:
Log in
231 Comments
the most recent
the oldest Top rated
See all comments

ON THE LEGO SHOP
ELSEWHERE
LAST COMMENTS
PROGRAMMATIC
231
0
Do not hesitate to intervene in the comments!x
Share to...
bufferCopyEmailFacebookFlipboardHacker NewsLineLinkedInMessengerMixPinterestPocketPrintRedditSMSTelegramTumblrTwitterVKWhatsAppXingYummly