To be won with the LEGO Club: 10 Bard the Bowman minifigs! 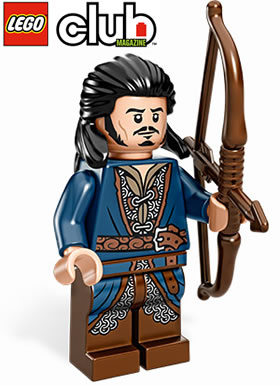 Now's the time to try your luck and get creative: LEGO is offering 10 minifigs of Bard the bowman in the version distributed during the last San Diego Comic Con which will also be delivered in the set 79017 The Battle of Five Armies expected this fall.

To win, you need to be lucky, but first of all you need to answer the following question: What is the name of the dragon that lives in Lonely Mountain? Not very difficult ...

But that's not all, you also need to be creative and original by answering another question: If you had to move a giant dragon away from a huge pile of gold, what would you do?

You think, and you fill out the participation form that is at this address.

You send everything (your responses and the completed and signed form) by email to the following address: contest.legoclub@LEGO.com before next September 28, indicating "Smaug competition"in the subject line of the email.

More information on this operation on the LEGO Club website.

A petition for even more LEGO LOTR / The Hobbit ... 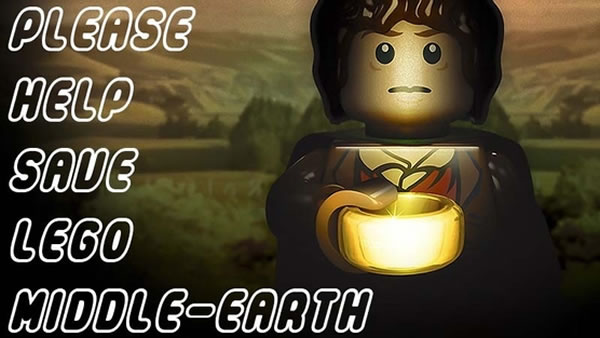 I have been inundated with emails asking me to speak here about online petition which asks LEGO to extend the LEGO Lord of the Rings range, which I am therefore doing to meet the expectations of all those who hope to be heard by the manufacturer.

Frankly, I believe that we should not count too much on any reaction from LEGO to this petition which is struggling to gather a significant number of supporters.

I can understand the approach of all those who would like to see Tolkien's universe declined in new sets accompanied by new minifigs, but I doubt that LEGO suddenly decides to extend a range that does not benefit from any direct media support and whose Relative popularity was only sustained by the release of three episodes of The Hobbit trilogy in theaters.

The range in question is obviously missing some emblematic places of the saga and some characters who would have deserved to be interpreted in minifig sauce. but LEGO and Warner had a plan, put in place long months before the first sets even went on sale, and there's a priori no chance that a few hundred fans who come forward through this digital petition would get a review of this. marketing plan come to an end.

The Lord of the Rings / The Hobbit sets released haven't always received the best reception from fans and the regular promotions at many merchants seem to indicate a desire to get rid of their inventory of products based on this universe. After all, if sales had been up to par, LEGO would undoubtedly have benefited from the success of the range for a few more years ...

Remember that some projects or claims presented on the LEGO Ideas platform have received real mass support supported by many media and many personalities and yet have been unceremoniously buried by LEGO.

Anyway, signing this digital petition will only take you a minute of your time, if you feel like it, it's at this address that it happens.

You know if you follow, LEGO has been hunting photos of sets expected for next October and most sites, blogs and forums have had to comply with the manufacturer's requirements to avoid dealing with the brand's legal department.

But that's without counting on the source of these images which still provides some visuals of the sets to come at this address.

We thus discover the part we were missing from the set box 79017 The Battle of Five Armies as well as the (almost) complete list of minifigs from this latest wave of sets in The Hobbit range.

We see that the set 79017 will consist of a catapult, a bridge, but also a structure with a tower that did not appear on the first photo of the set that we were able to discover a few days ago. The eagle present in this box is identified in the list of characters present: Its name is Gwaihir.

Remember: No reference to a possible upcoming The Hobbit polybag in the list of minifigs, no announcement for possible Lord of the Rings sets on the instruction booklets for set 79017. So that's the end of it. announced from the LOTR / The Hobbit range.

Bard's minifig featured in set 79017 is the one offered during San Diego Comic Con last July.

Other interesting photos are online at this address including close-ups of the Galadriel and Witch-King minifigs. 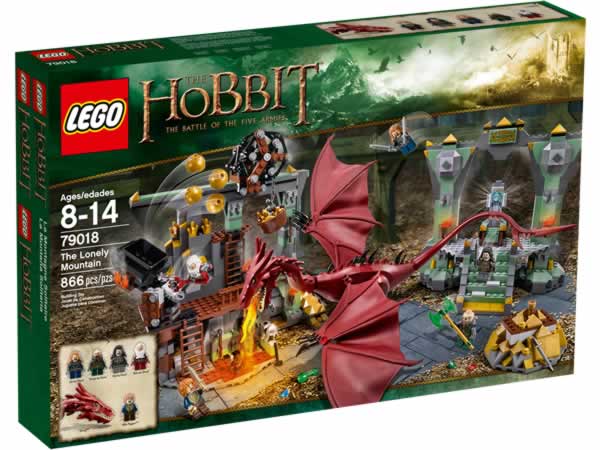 LEGO has released the full set of official visuals for the 79018 The Lonely Mountain set, unveiled at the last San Diego Comic Con, online.

For those who have seen the images of the other three boxes expected in the LEGO The Hobbit range, I think it's safe to say without getting too wet that the 79018 set is truly the furniture saver ...

High resolution (4000x3000) versions of these images are available on my flickr gallery. 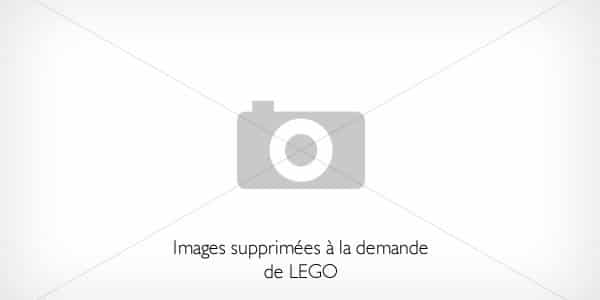 Update: Images removed at the request of LEGO, the rights holders of The Hobbit license are obviously very annoyed by the posting of these visuals which were not to be revealed before October 15.

First visuals of new LEGO The Hobbit, based on the third installment of Peter Jackson's trilogy titled "The Battle of the Five Armiess ", still not officially unveiled by LEGO and expected this fall.

Above, the set 79016 Attack on Lake-town (Retail price US $ 29.99): 313 pieces and 5 minifigs that can be considered an extension of the set 79013 Lake-town Chase released in 2014. It features Bard the Bowman, his son Bain, Tauriel and two orcs. Without forgetting the giant arch in the "Spring Loaded Shooter"...

Below, the set 79015 Witch-king Battle (Public price US $ 14.99) with 101 pieces and 3 new minifigs: Galadriel, Elrond (100% new version different from those already released in the polybag 5000202 and in the set 79006 Council of Elrond and different from that of the LEGO The Hobbit video game) and the Witch-king of Angmar, phosphorescent as announced by the various accounts of Toy Fair start of the year ...